The Annual Model Making Competition for BRMA(Q) members was held today. Amity and I travelled from Longreach to Brisbane for it (and for other stuff but principally for this) as the organisers deliberately held it during the school holidays (on the AFL Grand Final Day - which was a hassle but the Bombers didn't make the Last Saturday in September so it wasn't too big a hardship - and as the game ended in a draw, they are replaying it next week!!!).
I entered models in 3 classes - Modified RTR locos, Kit or Scratchbuilt Rolling Stock and Modified Rolling Stock. I was very pleased to win all three - particularly the Modified RTR Locos with my modified Farish 04 into Wisbech and Upwell tram style as this category I have won each time I have been eligible (if you win you can't enter for the next 2 years, although this rule has recently been change to 1 year). My other entries were two converted Peco wagons which are running on 2mm FSA etch chassis and a pair of Chivers Finelines LMS Plate wagons also on etched chassis.
I wasn't successful with the Grand Champion prize - this went to a very fine modeller, Graeme Clancy who had built a Midland Railway signal box to a very high standard. It would have taken something special to top this and I knew I didn't have it this year - but there is always next year...
Posted by Sithlord75 at 7:04 PM 2 comments: 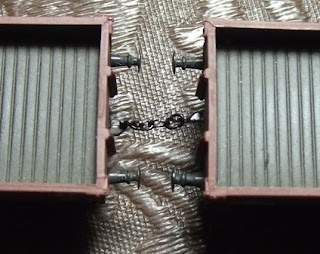 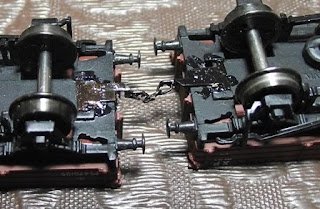 Having read about the Mathieson Models wagons and having seen on-line their three link coupling system, I ordered a pair of wagons and some three links to give them a go.


The plan I had was to see if it was firstly possible to use to link up Farish wagons without too much hassle. The photos show the couplings fitted on a pair of Farish 3 plank BR wagons. No modifications have been made to the wagons other than having the coupling boxes removed. The Mathieson couplings have had the fixing lugs fettled by bending inwards to fit and then the whole has been glued in place. I don't think there would be a hassle in reversing the process should it be required.


I subsequently tested a rake of 4 of these (so three sets of links) on a reverse curve of Kato 348mm track and both pushing and pulling didn't cause any hassles.


Other experiments have involved closing the gap (presently 3 mm which is a bit big although narrower than the normal Farish one) and this has been with a Farish PoW wagon. The locating holes for the coupling box are used for a guide and 1.2mm holes drilled aft of each of the holes. This brings the hook closer to the buffer beam but I haven't done another to see how it goes.


The third experiment was soldering a coupling onto the re-chassied Chivers LMS Long Lows mentioned months ago - about the time Mathieson first brought out their links. A bit of fettling and they soldered happily enough onto the DG locations and again, have traversed the reverse curves in both directions. As my layout has a 15inch standard minimum, I am well pleased. Just have to work out the position to the loco now and determine the length of spaghetti which can be handled.


Further pics tomorrow.
Posted by Sithlord75 at 8:52 PM No comments: 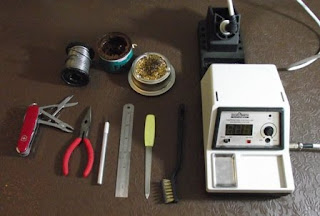 Recently I was talking to one of my mates in SE Queensland who was telling me about a gathering of British Railway Modelers of Australia members (I am the Central Queensland Unit) and they had a discussion of tool kits. This got me thinking and some posts to both the 2mm VAG and N Gauge Yahoo group about kit prompted this blog.
The photo shows what I use to make the various etched kits which are shown on here. Starting with the DSE solder station and moving clockwise there is a brass brush ($2 for a pack of three brushes - one brass, one steel and one nylon at Crazy Clark's - the Australian readers will know about this mob. I don't know of the International equivalents but below Aldi on the food chain of quality gear!); a old nail file - the type with sand or industrial diamonds impregnated rather than cuts in the metal; a 6 inch steel rule; cheap knife from Crazy Clark's - I break blades too frequently to get expensive ones - this was $2 for a handle and 10 blades (currently I still have all 10 so I mustn't have used this one to open a Humbrol tinlet...); small pointed nose pliers; the must have Swiss Army Pocket Knife - in this case one with pliers and the scissor are used to cut things from etches; the roll of solder - don't know the composition as I have had it for ages and the tag is long gone; some flux paste; and a brass scourer to clean the tip of the iron.
The only bits of this kit I would describe as "flash" is the solder station (and possibly the pocket knife, but I can hear the shudders from the purists from here - wild colonial boy moi???). The rest is pretty run of the mill stuff. The nail file was nicked from my mother over a decade ago, and is starting to wear out - not bad for 10 years of various kits (mostly plastic) and now brass and nickle silver. The other bits are what I can find out here. I have thought about the more expensive kit and I believe the posts which say once you try you won't go back, but I think of the pioneers in 2mm (N or Fine Scale) who "made do" and figure, if they can, so can I. So I do.
No actual modeling has gone on this week - too much (excuse me) work. Next week won't see much happening either as I will be away for (excuse me again) work. However, I will try and be awake enough to do something next Friday - transfers probably as there are a few things which need doing before the AMMC from BRMA (Q) the following Saturday in Brisbane.
Posted by Sithlord75 at 10:07 PM 1 comment: 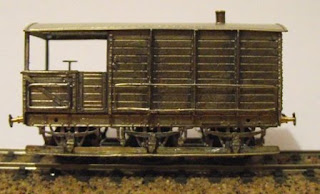 So hand rails are on - the small ones worked well, the large ones, well the picture makes it look worse than it is. NVD I am happy with it. I used a jig made using the sides which I didn't use in the kit and some track pins, wrapped wire around and then soldered it, before transferring to the sides. The large didn't quite fit so was fettled. Some may have gone back to square one but I am happy with the result. Chimney ex-Minitrix Warship buffer filed down and drilled out.
Depending on the weather tomorrow, it may get painted. I am planning on entering it in this years BRMA (Q) Annual Model Making Competition. 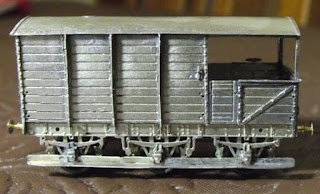 I have been building this over a period of 3 or 4 nights so far - the chassis was pretty easy as was the superstructure of the body. The detail has been fiddly but worth it. The lamp irons (you can see the side one in this picture - it has a matched one on the other side and there are ones on each end) are spares from my J70 kit. The end ones have been twisted to look more like GWR ones than GER ones. Hand brake spare brake wheel from something or other.
Sill have to sort out the hand rails on the sides and the chimney. Then paint (GWR Grey) and transfer and await the arrival of the Materson 3 links I have ordered and connect it up to the P19 rake it will back stop.
Posted by Sithlord75 at 11:40 PM No comments: