Not much modelling going on what with the end of the School year, the start of the Christmas season and the preparations for a massive renovation (which will add two bedrooms to the house – so more of a rebuild than a renovation but for accounting purposes…).

Stuff is being done however – Thursday nights I have been going to a mates place and getting on with my UFOs in the soldering pile.  I have been working on 5 Thompson Suburbans from Etched Pixels (although I think it might be the Ultima side of the Island) and then there is next year’s Area Group Challenge which I have started.

I hope to post some pictures in the next couple of days on the Thompson’s but in the meantime, Merry Christmas to all  - I hope Santa brings you something railway related amongst the gifts and mementos.

Swallow’s End – a first attempt at a 2mm layout

Long time readers will know I tried building a 2mm Scale layout whilst still teaching in Longreach way back in 2011.  The last entry on the topic was in October of that year when I was ripping it all up to start again on the basis that I wasn’t happy with how it was going.

So that is what I did.  I took everything off back to the paint and repainted.  There it sat, un-touched though the move home and the fit out of the shed.  I did do a bit at one point and painted the white bits brown – one of the issues I had with the first attempt was the dirt wasn’t hiding the white board underneath so I fixed that.  I then cut 3mm ply out to match the track plan as shown below: 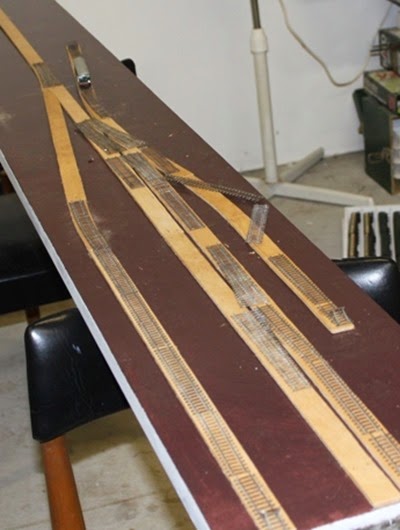 It was like this for sometime – actually more than some time as I looked at the date for this photo is May 2012!!  I didn’t realise it was quite that long ago.  The ply is intended to allow for the ground to be below the rail level a little bit although I am thinking it will all be up there – but it does allow for the ground to rise to the track bed rather than being too high.

Anyway, I got all the bits done – the gap between the two sets of track was filled too – and there it sat for a little while longer.  Say 2 years!  Since the August Australasian Gathering, I have been determined to get “something” running for the 2015 Gathering so have put a bit of time in.  The results are these: 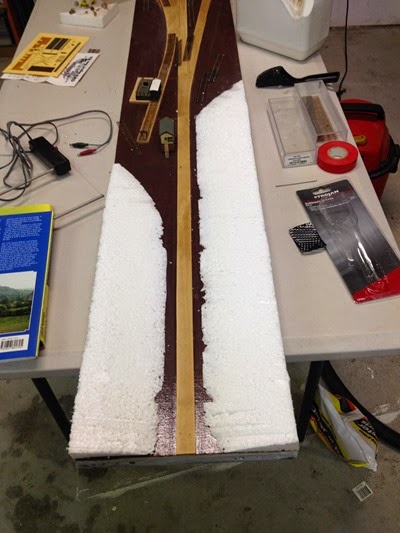 Some foam terra forming has taken shape at the fiddle yard end (must get around to building said fiddle yard!).  Naturally this is white rendering the painting pointless!  I have since covered it with the first round of plaster – I am going to do an over layer than put brown filler over it all so that once again there isn’t white bits. 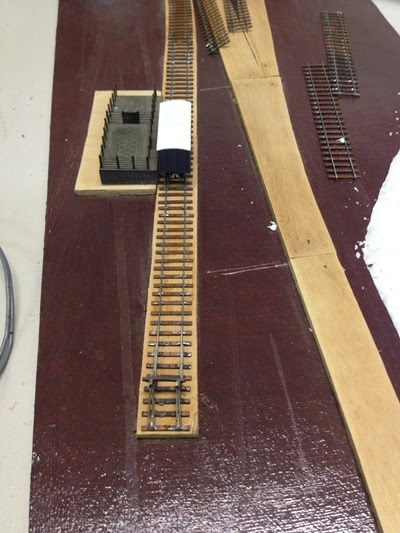 Plates for structures which need to be at the height of the rail (like my Cattle Dock) have been put it.  The rail here has been glued down – only because one of the other 2mm Scale Association members in our LAG has managed to start something for the 2015 Gathering as well and he had track down so I had to!

I have also done something about the platform base in balsa wood.  It will be covered with Scalescenes sheets on manila folders (which I seem to have rather a lot of now that I have tided my desk at work).

Further progress has taken place but I haven’t taken any decent photos – will sort that out hopefully later in the week.