The Rise of the Wisbech and Upwell Tramway Down Under

The etches of the rolling stock which was characteristic of the W&U arrived from Darkest Essex (see the blogs I am following) on Thursday and the first of 5 tram locos was built the same evening. As there aren't instructions for this kit, I wrote down what I did - anyone interested in what I did is welcome to get in touch. The loco is actually going to be Isle of Sodor Railway No 7 - better known as Toby the Tram Engine. As such, I wasn't too worried if it didn't end up exactly like the pictures in the books. The buffers currently fitted are standard 2mm FS turned brass ones - Great Eastern Loco buffers are going to be ordered when I get around to sending the order to Shop 3. 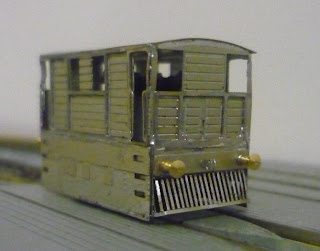 I am very pleased with how it looks - and it is going to run (which I haven't tested yet as the Darling Daughters railway is still in the process of its expansion/relocation and hasn't be repowered yet) on a Pro-Hobbies chassis - they have been written up in the NGS journal and I suspect a few 2mm FSA Members have got hold of them.

Next on the list was making Henrietta to go with Toby. This was tonight's project while watching round 1 of the new AFL season (Essendon has done pretty well against 19 of the 22 who won the premiership last year for Geelong, fading in the last term but holding on for quite a while). 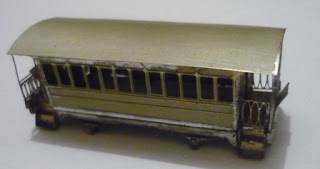 The results of the efforts of 3 quarters of football are shown. Still a few bits to go - buffers, coupling hooks, brakes and wheels and I suspect there should be some vents on the roof but I haven't really looked into it. It captures what I want at the present time and again, gave me some insights into the build. There are instructions but I will be adding to them from my experience and sending the notes back to Essex. Given that this etches were the reasons why I joined the Dark Side (and the 2mm FSA) I am very glad I did - and David can take a bow too as they are very nice etches, go together well and even with no instructions, a newbie like me was able to do Toby in under 3 hours (and this included fettling the motor to fit) using the etch and a couple of pictures.
Posted by Sithlord75 at 11:01 PM No comments:

The finished point! Very pleased - particularly that under gravity, a bogie will roll from the right hand track, though the point and drop off either of the two exit rails. No snags, no falling into the track. I don't think it is the right gauge - seems to be a little wide (I am using the 2mm track gauges to tell me this so it must be right) and I suspect the problem is it is flat bottom rail from Canada and I think it has a coarser profile than the 2mm FSA stuff does. Still, as a first up attempt I am very pleased - destined for the fiddle yard I think but I will work out the electronics, solder some droppers and run something (probably a light bulb as I don't have a loco yet) to see if there are electrical hassles, then paint and put in a box, awaiting a layout. Took just under 2 hours I think, over two nights. I will actually time the next one to see how long it takes - then do an Easitrac point to see how it goes for comparison but I think these ones will be easier to ballast.

I made a start on my first bit of point work - and soldered track work - in 2mm Fine Scale tonight. The photo is a B7 RH Point. In the end, I only got about an hours work done what with the needs of the domestic authorities from time to time. I used one of the 2mm FSA jigs - I don't remember which one I ordered to be honest. I will have to sus it out so I know if I am doing the right thing!!! I also used flat bottom rail rather than the traditional bullhead. I originally purchased the FB rail to put on some NGS bogie bolster kits, and then found I had the wrong kits for carrying rail! So a use was found.

I am not aiming for neat or speed at this point. I will be glad if something runs though it 99% of the time as I suspect this one will be destined for the fiddle yard.

Comments are welcome - I think you might have to create a blogger account and follow this blog to leave comments, but it is free and you don't get annoying emails (well I haven't) and you don't even have to blog yourself if you don't want to.

I received recently some more of the very excellent N Gauge Society Stove R model. I got some pre-ordered (BR Crimson and Cream, BR Maroon, BR Blue and LMS Crimson) and decided that I had one too many Crimson and Cream and not enough (ie none) BR Crimson. It was the latter which turned up recently (along with some LMS ones for non-NGS member mates). Now I wasn't too impressed with the very light grey rooves (roofs?) and have thus had a go with the good old Humbrol No32 which I favour for things like this. The shot above shows the before and after on the BR Crimson versions. Probably not the right base grey for this livery but works very well with the BR Maroon and Blue versions. I have the Precision Paint colour for Crimson coaches but I find it only works well with an airbrush - not an option out here in the bush and besides, the body is integral with the roof. I am however, having a go with the LMS Roof Grey on my LMS example.

At the same time I was painting the Stoves, I handed off the Dapol BR Blue CCT which had come from the Alton Model Centre (this is ND008 - and one of the early ones. AMC still had it in stock so well pleased for the tip off - thanks TM of ACT). I had managed to win a bid for one on eBay shortly before the tip so I now have two. The roof colour on the original is shown here next to the first coat of No32. I have since done both vehicles and fitted them for close coupling.

Not content just with these, the various finished etched kits were primed and painted on the weekend - the rain has stopped at last and humidity resumed its non-existence. I also painted my recent NGS Gresley BG kit. Dulux Quickdry Heritage Red seems to be a good match for BR Maroon - given that no two painters mixed it the same back then and weathering depended on a lot of things.

Next plan is to finish the BG, fit sides to my Ultima LMS 50' BG and paint the Prestwin shown earlier. After that, it is back into chassis and hopefully the W&U etches will turn up - they are taking an age to come from Darkest Essex.
Posted by Sithlord75 at 8:43 PM No comments:

Tuesday - database entry night. Well, it will be when I get a Round Tuit.

My database has been a labour of love and hate for over 10 years. I blame Gary Stephens and Greg Goodchild. Gary had this great idea many moons ago about doing a loco-spotting competition amongst the members of the BRMA Brisbane North group using published pictures. He would give us a random list of 10 locos (all BR numbers) which we had to find. The rules were simple. Find the loco - 3 points; find within +/-10 locos - 2 points; and find the class only, 1 point. Maximum of 30 points per fortnight. It went for 10 fortnights (I think) and Greg won. I only had small library back then (poor uni student) and I decided to make things easier I would put all my photos onto a database. Even after the competition ended, I kept doing it. It has come in handy over the years as I have been able to find pictures for fellow modellers, and find pictures for me too.

A couple of years ago the file got corrupted and I lost about 2/3rds. I wasn't a happy little camper but decided to start rebuilding. I made some changes and have added more detail to the database. I have also started a second data base - this doesn't track locos, it tracks photos of the Wisbech and Upwell Tramway. It will be used to build our 2mm layout(s).