Long time no blog – but stuff continues to happen

Well, maybe not in the scheme of things (see 2012 or 2013 for example) but  by the standards I have been trying to set this year…

So what has been happening?  Well, the May Area Group meeting came and went.  We did some spray painting of wagon kits which had been completed by members.  GWR and LMS Wagon Grey being the order of the day saw a variety of wagons get a coat of paint.  Hopefully in due course there will be photos of the finished articles.

Next up was getting ready for the Toowoomba Model Train Exhibition (TMTEX).  I haven’t taken St Alban’s Priory out since May 2008 so a bit of time was spent in finishing off the grass, trying to get the fences replaced (didn’t happen) and a few other bits and pieces (also which didn’t happen!!).  The main effort was wiring up the yard so that it was able to be shunted.  This sort of happened but I ended up with a broken point 48 hours before pack up.  No time to replace (ballasted section!) so we ran a truncated shunt service over the weekend.

TMTEX is rapidly replacing the Brisbane Train Show as the best in South East Queensland – and from an exhibitors point of view, it has been the top one for sometime.  The Darling Downs Model Railroad Club lets us camp in the exhibition hall which tends to mean late nights chatting with fellow modellers or tinkering with layouts.  All good fun.

Since TMTEX I have been working hard at my actual job!  Nevertheless I have managed to get up to speed with Autodesk Inventor (which as it happens I have had to learn for my job!) and the result is I have been having a go at drawing 3D wagons with a view to at some stage printing and seeing what happens. 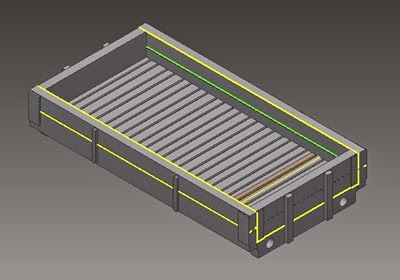 People with access to LNWR Wagons Vol 1 by the LNWR Society can have a look at page 73 (I am aiming at the D6 personally) and see what you think.  The bolt heads haven’t been added yet and I need to also put the inside groove on the ends – to match the green line on the side.  Any comments/thoughts/criticisms welcome.

Lastly, the 2mm Scale Association Australasian Gathering has been taking up some time – members of the 2mmSA will have been able to read the news in the latest Magazine and via the VAG.  Hopefully there will be art to display here in the near future.