Trying to get back into the Friday night update habit and, by extension, getting some modelling done so there is something to update with!


So this week, I have two things - my WD8 which I got for Father's Day (the test haulage video is further down the blog) was the subject of weathering practice at this months Area Group meeting (which was back a couple of weeks!) but I have done some more with paints on it since.  There is still a bit more to do I feel to match the various published photos I had a look at - my preferred one being a shot of 90012 approaching Ais Gill Summit on the Settle and Carlilse.  I did think of renumbering my loco to match, but I suspect there will be a second one coming at some point, so I will do that then.  This one is for hauling mineral wagons, and the photo is of a mixed goods.
Initially I used some of my Tamiya weathering powders which work really well for putting the brown grime on the tender axle boxes and dulling down the numbers and crest.  The black provides a sooty feel but the various lighter shades didn't work well at all in producing the streaking effects which seem to be so common on these locos.  So out with the paint.  This isn't my preferred medium for weathering as it is a bit no-reversible once it has dried.  This is especially so with my preferred Humbrol Enamels.  The streaking from the safety valves was achieved with a dry brush and a little of the palest grey in the Humbrol range - can't remember the number at the moment but if you are interested get in touch.  A bit of matt black was dry brushed on behind the chimney which gave a much better sooty effect than the powders did.  As a result I think I will do a bit more with the paint and see what else I can manage.

The second item is actually an FOed UFO.  Long time readers will know I built an example of the NGS Kit 4 - the brass etch Sealion.  It has been languishing around waiting for transfers - being one of the older kits in the NGS range, it doesn't come with included transfers.  However, the hardworking transfers officer of the NGS has managed to get a set done which provide transfers both for Kit 4 and Kit 11 (which is a plastic kit for the later Seacow - really should be called a Dugong says the Australian in me!).  Unfortunately it doesn't actually say what is on the transfer or where on your model you should apply it.  So the Internet and Google (mostly to Paul Barlett's excellent website of photos) showed that there doesn't seem to be a universal location for the details, other than the data panel with the number goes on the LH end.  Comparing with my Farish RTR examples shows the NGS one is significantly different - being shorter to start with.  In the end, I decided I would please myself and stuck what looked like the right sort of thing in the right sort of place.  As this wagon will be joined by a couple of others - and something will be done about the coupling gap - I was pleased to see there is enough numbers to transfer 4 wagons.  Now if only the NGS would hurry up and produce some transfers for the Cartic 4 - I know Cambridge Custom Transfers do a set but that is for the prototype and they only do the one, and I drive a Holden, not a Ford.

I've mentioned this from time to time but have never really gotten around to properly addressing it.  Just to recap: Back in February I formed a group of modellers who were members of either the NGS, the 2mmSA or BRMA or a combination thereof.  One of the ideas we had to improve our modelling throughout the year was a diorama which had to have the footprint of an A4 piece of paper.  There was no deadline for these to be completed but the general thought was by Christmas at least.
Mine is based on a segment of my 3rd rail BR TOPS era layout "Swallow Street" which is awaiting a complete rebuild.
There was a brief entry with one photo back in July.  Progress has occurred since then and it goes like this: 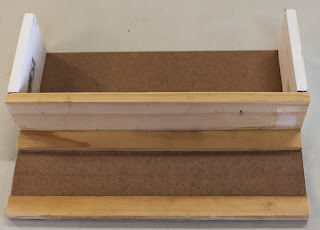 The basic structure.  The track bed is the bit of Masonite at the bottom here between the two pine platforms.  All dimensions were scaled off the 2mm SA print of the loading gauge in the Yearbook.  Turns out that I got some of it wrong. 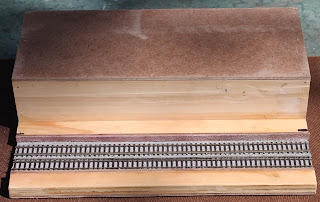 First lot of progress.  Track laid - Easitrack.  Lid for the roadway and houses above and extra bits added to the platforms to make the trackbed the correct width - it was too wide the first time.

Closeup of the track bed.  The third rail has been soldered to Peco trackpins and these have been inserted every fourth sleeper as per the details here.﻿ 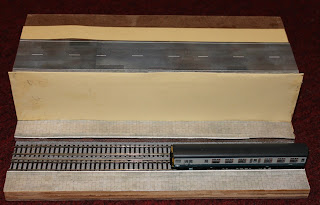 And this is where it currently stops.  The platform surface has been done on the closest platform but unfortunately I ran out of the white edging papers (all papers are Scalescenes) so the back platform hasn't been completed.  Will have to wait for me to buy the colour laser printer I have had my eye on - which may have to happen sooner rather than later now!  The road is in place and a concrete footpath is against the wall (which is manila folder).   Next step will be to put the wall in properly and then consider if I will put arches on it for decoration purposes. 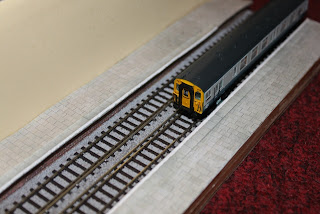 Bit of a detail shot of the excellent 4CEP which is part of the reason why I am getting more interested in 3rd rail.
So that's progress thus far.  With two weeks of school holidays, I am hopeful of getting more done prior to the next LAG meeting in October.
Posted by Sithlord75 at 9:52 PM No comments: