A House in Your Hand

To some of you, the title of this post will seem familiar – most likely because like me, you supported Andy Vaughan’s project on Kickstarter (here).   Now I have no connection with Andy other than being one of the supporters as I thought the idea he had was a good one and deserved to be turned into reality.

Yesterday, my collection of etches arrived.  I had put in for the Village in a Box option along with the sheds as an extra so 11 packets arrived in a parcel with some 3mm MDF packets to protect from the posties along the way.  Worked a treat – no bent items in the set.

For those playing at home, I got 1x Kit 4, 8x Kit 7 and 1x Kit 9 along with 1x Kit 11.  I had suggested the Church (aka Kit 8) but the one Andy designed didn’t really suit any of my modelling plans.  To be honest, the rural nature of most of the kits didn’t really suit either but St Alban’s Priory’s row of terrace houses is in need of refreshing, the shop I have opposite them needs replacing owing to a broken roof and the original Manor House on the layout could do with a refresh too so I was able to find places for all of the Village in a Box options which I selected – I’m going to adapt my Kit 7s into a terrace as they seem a bit small for semi-detached to me and the 8 won’t fit unless I join them up!

Since I got them and I didn’t have any work to do last night (marking season at the school where I teach is going to hit this weekend!) I got stuck in and made up the two sheds.  Andy’s instructions are for using glue but I soldered mine.  No dramas were encountered and I’ll let the photos tell the story. 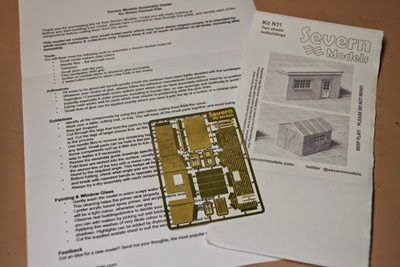 The kits all came in envelops with a picture of the finished examples on the outside.  The written instructions are generic and there is an exploded diagram on the obverse to show you what to do.  The kits are very simple and well thought out so using the pictures to build them shouldn’t cause too many problems.  The written part is a list of suggested tools, comments about safety (brass edges are sharp – that sort of stuff) and so on – nothing unusual or different about them for those with experience in the medium. 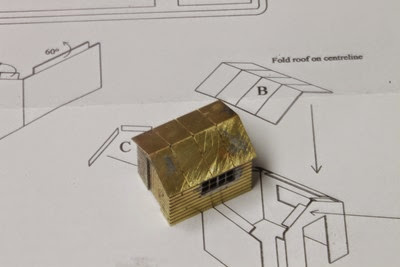 After about an hours work including cleaning it all up with my Dremel, this is what you have.  The door and windows are fairly flush – just the thickness of the brass behind.  To get them positioned correctly I tack soldered them from the front then turned it over to finish them off.  I didn’t fold up the box (as shown in the diagram under the finished model) until after this step.  I made sure it was square and then put a bead down each corner to maintain the rigidity.  Fitting the roof required a third hand because of angles but once I had two corners done, the rest was easy.  Barge boards are on the ends – they are quite small and I thought here we go but 3 out of the 4 went on with no trouble – naturally the one which was temperamental was the last! 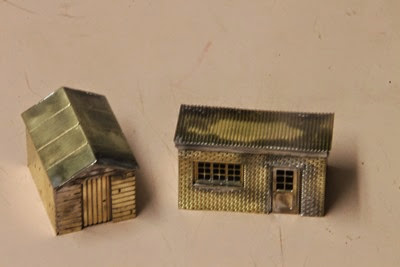 I had only meant to do the one shed last night but since it went together so well and so quickly, I did the other one as well.  The window on the second has a fold up window sill with helped with the positioning of it.

Both kits have a couple of short comings – no guttering nor down pipes and I am pretty sure the brick one at least should have a chimney.  These are going to be added.  The timber one is going to become the fodder store on Swallow’s End (long time readers will remember this is my “stalled” 2mm Finescale Plank – however… stay tuned!) and I think the wood one might end up as a gangers hut or a coal office on same.

All things being equal I’ll get some brass bits and pieces on the weekend to put the guttering and what not on and then paint.

Now to start on the rest!

I mentioned in my Reboot post that Julia is one of my inspirations when it comes to my modelling.  Her work on Highclere is first class and I would love to get to see it in real life one day.  Got to save the airfare first I guess!
One of the other inspirations to my modelling is much closer to home.  He is one of the members of the N Gauge Gang who come to my place once a month to “get stuff done (although sometimes the stuff is talking!)”.  Ken and I have known each other for getting on 15 years and his modelling has been pretty eclectic during that time, as he got frustrated with British N, moved to US N, then changed scales completely and spent sometime doing 7mm QR Cane Trains.  He is now back in N and as a result has joined out little group.
His most recent project has been to create a small shunting layout based on a dock scene.  He has used a number of kits from the Scale Scenes range along with a few Metcalf buildings and done a great job.
At the October meeting he brought it along – 900 x 300 I think is the all up measurement.  Unfortunately he didn’t bring the power pack so we could only look, rather than play.  Given that he is presently putting a pile of stock together with DGs the full on playing won’t be far away.
A few photos to inspire you.  The 04 is in the Etched Pixels tramkit as the FQR shunter “Mavis”. 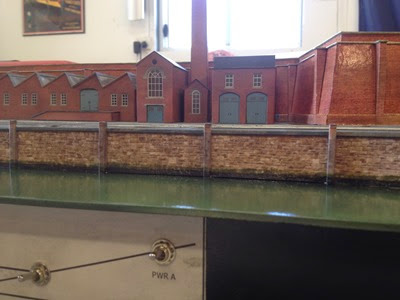 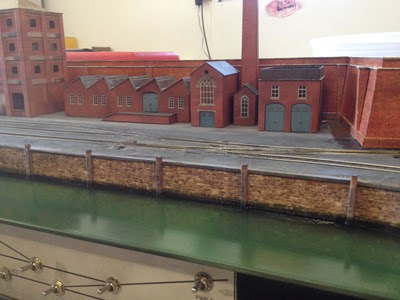 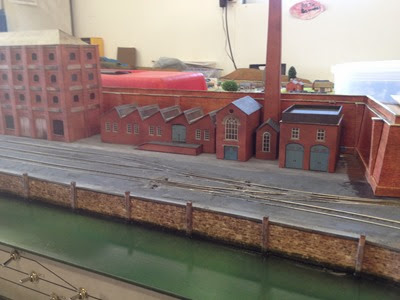 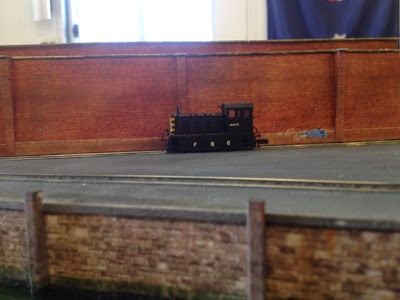 There is a boat in the offing to be docked – not sure if cranes are going to make an appearance or if the ship’s derrick will do.

A Quick Catch Up.

As I mentioned in the previous post, I have tended to spend my modelling time actually modelling (assuming I have had the mojo for it – this has not always been the case!) rather than blogging about modelling.  Consequently there have been a number of things which have been mentioned on this blog but haven’t had the whole story shared.

So what has been done?  Well I have had a look back over the posts of this year and noticed what I had mentioned and so the following list has been compiled:

So not all doom and gloom and lack of progress – just a lack of sharing and recording.

I feel at times like this blog is a bit like the Batman movie franchise - keeps getting rebooted only to die a few months later due to lack of time, lack of enthusiasm or too much work getting in the road of posting.  After all with a finite amount of time in the week I have found that doing actual modelling has tended to be more interesting than blogging about the modelling - and there has been times when the actual modelling has been in short supply!
Anyway, I had cause to go to the 2mm website today whilst at work (!) and I noticed in the blog feed at the bottom of the page a new blog I hadn't seen - Julias Modelopolis  Now I only know of one Julia who would be likely to have a blog linked to the 2mm site and I was intrigued to see it was like mine - a BlogSpot one rather than her previous postings on RM Web.
To cut a long story short, Julia is one of the 2mm modellers who most inspire me with my efforts - her Highclere Cattle Dock was the primary inspiration for my Swallow's End one (more of which can be found here for part one - other parts are easily found on the menu to the right once the page opens).  Now that she is back on BlogSpot the inspiration to get my blogging going again has likewise been found.
Stay tuned.
Posted by Sithlord75 at 9:51 AM No comments: