Sorry to those of you who have been looking for a post over the last couple of weeks – it has been that time of the school term when marking and the resulting reporting take over for a a little while and not much railway work happens owing to paying work being the priority.

All hasn’t been lost however with this lovely addition to the Australian locomotive fleet arriving direct from the manufacturer (after purchase I hasten to add – it isn’t a freebie for review – it’s mine!) via the Neb Noswal Express a couple of weeks ago.

It is one of “those” locos – interesting, been around for years – in this case, the prototype for mine was the first mainline diesel electric for the Victorian Railways and delivered to same way back in 1952.  Having been selected for a rebuild and new engine back in the 1980s the frames and bogies are still going strong, now as A60 rather than B60.

For those who are unfamiliar with the prototype may I suggest a visit here or a bit of a trawl around the internet.

Because mine is direct from Phil, I got a few hand me down bits and pieces – the collection of transfers for example didn’t include all the ones I need as there had been some with misprints – as we have been mates for over ten years and I don’t mind.  I’ll get the missing 3 in due course (all for number boards – somewhere along the lines the printer only put in one of each number on the first print, despite there needing  to be 4), so mine isn’t exactly a representative example of the production run.  Having said that, the model itself is and rather than worrying about reviewing the bits I added (nameplates, side number plates etc.) I’ll deal with just the model. 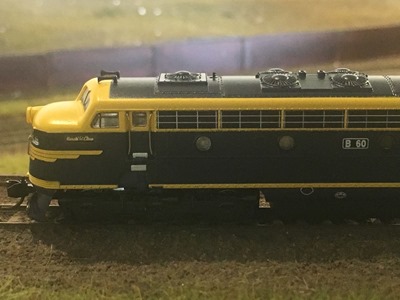 Running wise, it was very smooth straight out of the box.  It is supposed to be a match for the other Gopher Models (at this stage I’ve a pair of 48s, a pair of 44s, a pair of S and a GM12 to compare it with) and while it doesn’t quite match yet, I am sure with running in it will be much closer – at this stage B60 is about 1 inch slower around my layout, St Alban’s Abbey and this is a 5m x 1.1m oval so quite lengthy than the S class and 44s which will be running together.  As B60 won’t be needing to run with anything I am not too worried but my 44s work very nicely together (post on them to come) and once I have chipped them for DCC operation, I expect the consisting on the Brisbane Limited model I hope to build up will be spot on.

The model itself is finished in the later version of the Victorian Railways Blue and Gold scheme first made famous on the Spirit of Progress streamliner and is associated S Class 4-6-2 Pacifics prior to World War II.  In this case, the difference to its original livery is the yellow at the top of the doors – a practice which disappeared sometime in the 1960s I believe.  I haven’t been able to find out exactly when B60 got its doors so treated.  Those who want an earlier B will have to be delicate with a paint brush.  I believe the Blue matches the Steam Era paint VR Diesel Blue but how close the factory in China got it, I can’t say. 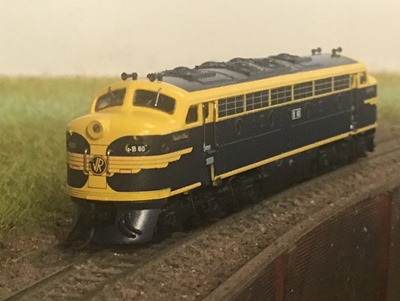 As far as printing goes most of the pad printing is very crisp.  I found some bleed points on the side of the body near the grills, but since I don’t ever remember seeing one clean here, weathering to suit the normal late 70s early 80s grime from my childhood will solve this problem.  To be honest it isn’t noticeable at normal distances and it was only with the benefit of my modelling glasses and deliberately looking for “faults” that I could find it.  Everything else is what we are coming to expect from Phil and his Gopher stable – just a shame Ixion didn’t take off for the British Modeller but that is another story!

At this stage the B is only available in VR Blue/Gold and a special livery done for a Streamliners weekend in Goulburn.  Phil has a number of unpainted models, one of which has been done for Ben in the VicRail Tangerine T-Cup livery from the early 1980s.  It looks as vile as I remember but Phil has done a nice job in the painting of it.  I understand if demand is sufficient to warrant a second run, the V/Line scheme which replaced the Blue & Gold and Tangerine liveries.  Even later liveries, such as SSR and WCR will probably remain special paints jobs by Phil but since the SSR 44 was done as RTR the B may manage to be done for those looking for the set.

If you’d like one – or one of the other Australian RTR diesels Phil has done – go to www.badgerbits.com.au and follow the links.  I’ve not been paid for this review.  Phil doesn’t even know I’ve done it.

We had our third get together for 2018 last Saturday with 7 members in attendance.  I didn’t get around to taking photos which is a shame as David G had brought along quite a lot of his stud of locos for a running session, many of which he has had weathered professionally.  A quite impressive collection.

We welcomed back Anthony from his three year posting to Sydney with the Army – he swapped in for Ben who the Army saw fit to post to Puckapunyal at the end of last year.  Anthony showed us some of the building progress he has made for his North Wales line.  Hopefully we will get organised enough for a visit once he is fully back operational.

David H had brought his DCC programing set up and sorted my NCE controller which was playing up – turned out it was the cable rather than the controller.  A bit of playing around with DCC locos resulted.

Discussions on Hollie’s and my new layout were fruitful – I’d put some Kato track one to see if the geometry was workable and it seems it will be ok.  I’m hopeful that we shall have significant progress by next month – fortunately I’ve two weeks holidays coming up straight after Easter so the signs are good, management permitting.

As always, if you are around South East Queensland on the Second Saturday you are more than welcome to come along and join us.  Just drop me a line.