I haven't really done much modelling since the last update - I have made a start on converting a Dapol Autocoach to 2mm Standards by making some bogies for it. Still working out what else to do to it (fixing the vents on the roof is high on the list - and I am thinking of putting it in the last GWR coach livery rather than the late 20's/early 30's livery it currently is in).

What I have been doing is getting packages almost every day (the flood waters are down and the mail is getting through). Today's was from the Alton Model Center with a rake of Dapol Collett's in GWR livery - the first batch years ago sold out in a flash and even this run (NC041-NC03) vanished from the likes of Rails and Hatton's fairly quickly. Fortunately AMC had enough for me to get a rake of 8 - and a BR Blue CCT (NB008) from quite a long time ago. Very happy to have been given the tip from a fellow modeller in the ACT.

Other arrivals include a BHE Royal Scot and a Farish Jubilee - the latter for my wife. Hopefully the nameplates for the Jub turn up soon - 5566 to go with my 45565 so we have our States of Origin running on our layouts.

Last night I ordered the chassis for the J70/Y6 locos which we hope to start building in a week or so - although following the arrival of the NGS Journal one is going in my PD Marsh Sentinal kit - which will be numbered for the W&U Y4.
Posted by Sithlord75 at 5:23 PM No comments:

As promised, pictures of my recent efforts. Please bear in mind that these are a scale of 2mm:1 foot and the enlargements are cruel. They look pretty good in the flesh and from NVD. 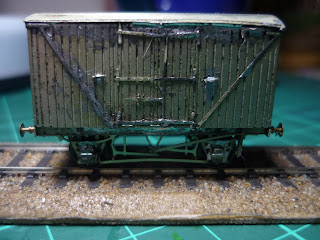 This is a BR Banana Van to Diag 1/242. It was my wedding anniversary gift from SWMBO as the traditional gift for the 4th Wedding Anniversary is Fruit and Flowers. It is also the kit which I had a lot of trouble with and prompted the purchase of the T2250 solder station from DSE. 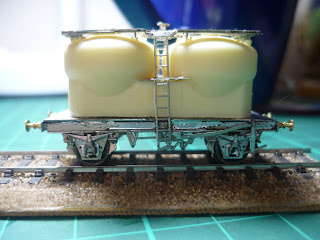 A BR Prestwin to Diag 1/277. A 2mm FSA kit which I have been eyeing off for a good number of years. As detailed elsewhere I joined the 2mm FSA in 2009 and purchased the kit, not expecting it to be as complicated as it ended up looking. I was right - it wasn't that complicated and I expect I will be making another couple to go with this one. 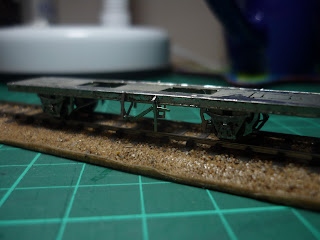 A Fencehouse replacement chassis kit for the Chivers BR Tube kit. I have 5 of these wagons and they have never run particularly well. I blame the maker as the rest of the kit went together very nicely with the minimum of fuss. Given I have trouble with my Parkside kits as well, I expect plastic chassis which are more complicated than Peco ones are beyond me. Fortunately I can get these instead!!! 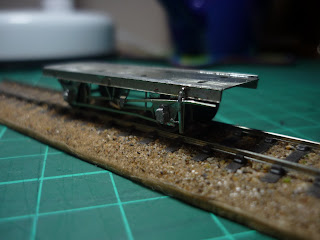 Fencehouse's replacement for the Parkside Dundas 12' chassis. I have a few of these and like the Chivers ones, they don't run well. Now they will.


I really enjoyed putting the last three together, and once I had the good iron, I enjoyed the first too. I would stongly encourage people to have a go at etched kit construction, but invest in a good soldering iron first!

Footy returned tonight for 2010 with the Bombers travelling to Perth to play the Eagles. Sadly, the Bombers while brilliant in the first term were not so flash after half time and faded to be shut out by 6 or 7 goals (I rarely remember the losing margin - and winning ones aren't relevent 'cause we won!).

What place has this on a Railway Blog? Not much other than I got the iron out and did some modelling in front of the footy. I finished the Prestwin - the valve gear between the tanks isn't that great but it looks the part from NVD so I am not worried. I also continued with the replacement chassis program for my Chivers and Parkside kits - this time building one of the Fencehouses designed Parkside replacements. Went together really well - the only down side being that there are no etched springs nor axleboxes on these kits. I presume - can't find destructions for them - they are designed with the glue one whitemetal axlebox and spring bits in mind. I had a set of four which I used and they look good and run very freely and true - much improved (although the wagons are all in Brisbane so it will be a while before they are fitted) but annoyingly I can only do the one - the 2mm FSA seems to be out of stock of the rest.

While this will set back the Parkside replacements, I still have 4 Tube wagons and 4 LMS kits to build chassis for - all of these etches seem to have all the bits I will need so another 8 games and I should have them all done. By that stage the wagons may have been gotten from Brisbane and then the fitting will commence. The next conundrum is what couplings to fit - these are all basically interchangeable between 2mm and N gauge so putting Rapidos on seems silly but I suspect they will spend more time on N gauge layouts than 2mm ones so... At least changing the couplings might be easy at a later date if I use the right adhesive.

Sorry about the lack of photos - still haven't taken any. Will try to in daylight tomorrow.
Posted by Sithlord75 at 10:37 PM No comments:

On My Work Bench - a number of things really. I purchased at T2250 temperature controlled soldering station from Dick Smith about a week and a half ago. This was in response to the advice of fellow members of the 2mm Fine Scale Association Virtual Area Group who, very politely, suggested my Mitre 10 Iron wasn't really suitable. What a revelation. This has been such a joy to use. If you don't have such a beastie and you are becoming a bit more interested in the brass and nickle-silver kits around then I suggest, in the finest traditions of Dilmah - do try it.

So what have I done since the arrival of the latest tool? I have completed the Banana Van kit I got from Amity for our 4th Wedding Anniversary - I didn't read the instructions to start with which I have decided was a mistake (not fatal, but a mistake!) - and a Prestwin (well almost complete - a bit of the valve gear arrangement at the top of the tanks to do). I will post photos when I work out how to do this easily - Amity tells me there is a trick using some program she has but taking the photos is kind of necessary.

The next project is to make a Work Tray - the work bench as such is the dining room table - which I can keep all my stuff on and just take it out, plug the power into it and away I go with everything available - Iron, Lamp, Test Track - and more importantly, just unplug it, pick it all up and put it out of Hollie, Jessica and Hannah's reach.
Posted by Sithlord75 at 9:13 PM No comments: