Lots of people have embraced the development of 3D printing as a viable form of modelling - although there is an on-going debate in the LAG about its status regards kit v scratch built for the purposes of modelling competition categories.  Shapeways in particular has been a driver in making one off models economically viable, particularly for those who lack the skills or time to scratchbuild from more traditional media.
I was lucky enough to be asked at the end of 2013 if I would consider taking on a CAD Technology class at the High School were I normally teach History.  Despite the fact that it was 2 decades since I had last done tech drawing - at that was with a pencil rather than a computer - I said yes as I thought it would be an opportunity to learn the skills necessary to draw either for 3D printing or for 2D etching.
As it has turned out, I have been able to get some 3D stuff drawn and produced by Shapeways.  My LNWR D6 open is about to be re-done for a third time and my D15 Beer Van is going to get a second edit.  The biggest issue I have found however is the cost and time in getting a test print organised.  As Shapeways has a flat postage rate, getting a single print sent from either New York or Holland (not sure if they have anywhere else that they print from - these are the two places I've had stuff from) is an expensive business and takes up to a month from uploading the .stl file until the (oversized) box arrives.  Then if you find it didn't work as you thought (and I have had a couple of prints like that) it is back to the drawing board and try again.  Obviously with experience the first one tends not to be unusable these days but still...
Fortunately I have a long suffering wife and when the local Aldi supermarkets advertised a 3D printer as being on sale in one of their advance catalogues, I looked up the specs and decided that it was pretty good value for $500.  Further discussions resulted in me lining up outside the Aldi closest to work one morning back in February to purchase one (as it turned out, the blokes at work who use one more than I do had seen the same catalogue, done the same research and were there to get some for school!).  A few prints later and I was happy with what was coming out.  Whilst I don't think I will be able to print a wagon body, I am pleased to say that I have managed to get some very satisfactory prints for modelling purposes from it.
Pictures for the rest of the story: 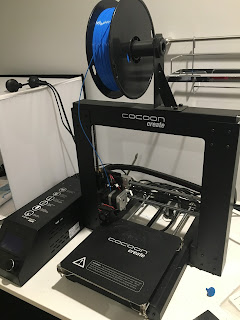 The printer - not flash but it does the job. 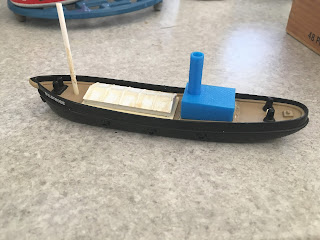 One of the early prints was attempting to see if I could build a wheel house and engine room for this conversion of an ERTL Thomas The Tank Engine Bulstrode the Barge into a costal freighter. 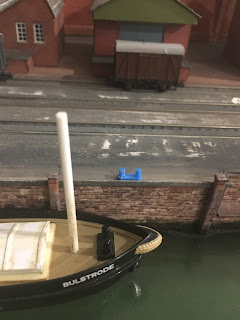 In testing the limits of the printer, I designed these dockside bollards.  They are 3mm high with a diameter of 1.2mm on a 1mm thick base.  They did need a bit of cleaning up with a sharp scalpel afterwards but having printed 14 of them I am glad I didn't have to try and scratch build that many identical objects! 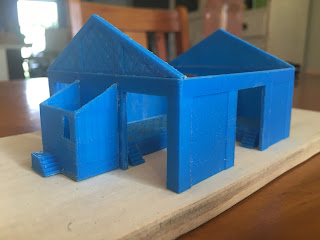 Something a little more ambitious - the full story will come at a later date but this is the Goods Shed at St Ablan's Abbey LNWR.  One of the reasons why I wanted a 3D printer was to do building better and this is the first attempt.  Very pleased with the result. 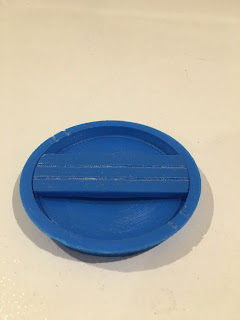 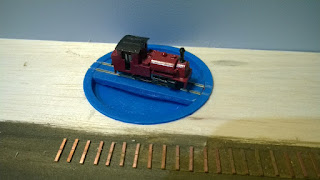 One of the LAG mad men (David H!) has a N6.5 railway on the back of his layout.  As part of this he thought a turntable would be suitable.  Enter some ideas and the first print was done before the end of the meeting.  Several tweaks later and the final print is shown and then installed on Toshalt.
Posted by Sithlord75 at 7:00 PM 2 comments:

The best-laid plans of mice and men often go awry - at least that's the Sassenach translation of Robbie Burns' ode To a Mouse.  Like lots of clichéd lines, it has the benefit of truth behind it.  So it is with me.  Updating the blog didn't happen mostly because, well, lots of reasons, but as I tell my students, you always find time for what is important.  Guess updating wasn't for a while!  Still, it nags at me and I do get requests from time to time to "update your blog!  I want to see what you've been doing" so...


What have I been doing?  Lots but on the assumption it should be railway related, not as much as I'd like.  However, some of the things which I will write about over the coming weeks (having decided to get the Friday Night Update going again - I can do this in front of the TV), include the build of an LMS D1817 Beer van, a LNWR D15 Beer van (both my 3D print and an etch organised via the 2mm Scale Association) and my adventures in 3D printing courtesy of my Aldi Printer.  There is also the final round of pictures of my Nuclear Flask Loading Facility Diorama which I did for the LAG Diorama Challenge last year - although Neb Noswal has stolen my thunder a bit by actually putting it on his blog on the day we did it!  The benefits of organisation.
Further adventures are planned - I got the whole sheet of LNWR etches offered last year so I have a number of builds to do - 6x D33, a D43, a D13, a D26, a pair each of D16 and D17 brake vans and then some NPCCS items - a pair of horse boxes and a CCT.  To round out the LNWR stuff there has been some deliveries from Shapeways of Chris Higgs' designs which will require chassis - and have given me food for thought in tweaking my own designs.  I also partook in the LNWR Coal Tank subscription so 4 of those are going to be erected in due course.  Not sure if I'll do them individually or as a batch production.  And finally there is news on the Layout Front.
I am also looking forward to attending the 2mm Supermeet near Burton-on-Trent in late June.
So that's the news - first Friday night update tomorrow, with photos (although to be honest, I am pretty slack at taking photos as part of the build process - too busy doing the next bit).
Posted by Sithlord75 at 12:27 PM 1 comment: