I decided – on a whim; in desperation; I cannot remember as it was quite some time ago – to use Peco track pins to represent fence posts and “imagine” there was strands of wire between them.  Now for keeping sheep in on a station in Australia, that is about all you need.  However, having had a look at Frankland (start here on the N Gauge Forum – scroll down for the Walthers Gas Holder or have a look here at page 6 of the posts on the New Railway Modellers Forums.  Google also brings up various incarnations of RMWeb with more)* for the inspiration for the changes which are detailed below.

The first thing which I did was get hold of one of the Walthers Gas Holders – although that pre-dates the finding of Frankland.  I received the kit for my birthday in 2013 and got some building done, but the glue I had wasn’t working so it was put aside until I was able to replace the glue.  New glue got this year and the kit was completed.  The kit is good in that it gives two height options for the tank – I opted for the highest but I am planning on getting a second which I will do at the lower height for variety.  During the day the heights would vary depending on usage and manufacturing. 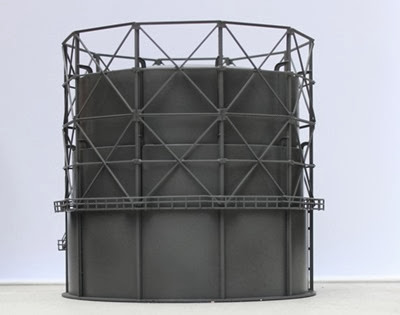 This is it completed and given a coat of Humbrol 64.  Having gotten in touch with Mark and asked him how he did it (see page 11 of the N Gauge Forum discussion for details) and discovered I should have waited to put all the lattice on.  Live and learn.  So the gas holder is as above at present while I think about what to do – visit to the LHS might be in order to see about paint options and then do detailing and weathering.

Attention then turned to the fence.

I decided that something needed to be done with it as I was getting ready to continue the refresh of the grass from the pervious session (Part I Post) and felt that as the fence wasn’t right, I was going to have to fix it first, then do the grass.

So several nights later, the Gas Works is now surrounded by a wall, a scale 10 feet high and 18 inches thick – double bond I think it is called.  The wall is made out of 1mm styrene laminated to give the 3mm required thickness.  I am planning on covering it with Scalescenes aged red brick paper.

So far, the first bit has been done – the picture was taken almost as soon as I had glued it so the white bits are actually undried glue. 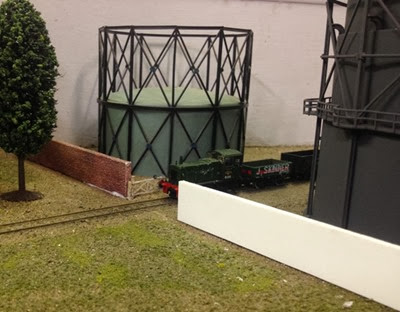 I decided that while the road entrance would have some seriously solid gates, the rail entrance would get Peco level crossing gates.  One, they fitted the hole, and two, the story goes, that there was seriously solid gates until one day they jammed whilst being opened to let the train out, and as the train was already approaching and failed to stop, the gates were opened by the gentle attentions of a 4F and 16 empties… Meanwhile, back to applying brick paper – and printing some more.

* too many forums to keep track of to be honest – hence my blog!

The Monthly meeting was held yesterday with the central theme being Templot.
As a number of us are interested in building our own track and I have previously had a go at Templot I gave a short overview of it.  At some stage later in the year, when I have refreshed my memory better as to how it works (work managed to get in the way in the week leading up to the meeting so I didn’t get around to running through it as much as I had hoped – and as users will know, it does take some getting used to) we will revisit it.
In other activities which were either going on or discussed, Anthony continued some work on his model of Conwy – for full details of what he is planning on building and his progress see his blog on RM Web here.  In the meantime a photo of progress on one of the tubular bridge ends is below: 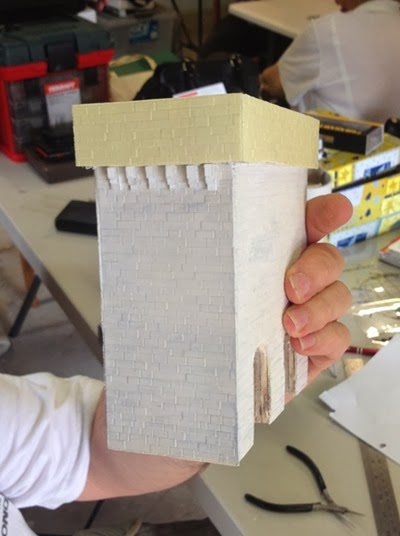 Ben brought along his Atso-Cad Models Patriot which he had obtained from Shapeways.  He has a spare Union Mills Fowler tender to put behind it and the Fox lining to go it.  The lining is for a different, slightly over scale kit (!) so a bit of cutting and shutting to get the lining to fit the body and tender will be required.  Again, photo below:

New member Ken showed us the results of his experiments with wire he had obtained from a fishing tackle shop (BCF for the Australians reading) in whipping up the loops for a DG coupling in seconds with no soldering required.  Self was quite impressed and I plan in visiting the local branch sometime in the very near future and doing like Ken has done – make up a batch and have them ready to go.  Once again, a photo below.  The jig is a modification to the DG one available: 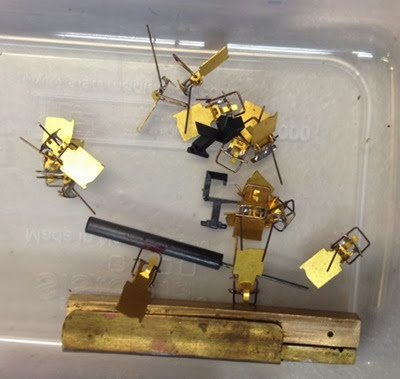 Other activities involved checking out a pair of new Farish Fairburn tanks which, at the time of writing, have been the cause of some discussion on a number of forums over “wobble” in the running.  Both locos were adjudged to be excellent by the observing gathering – not so much the Dapol A3 on test which required quite a bit of mucking around with a Dremel to get the overzealous wheel blacking off to improve the pickups and running.  I suspect had we been closer to the supplier rather than 10 time zones away, it may have gone back but after a couple of hours of work it was deemed satisfactory.
We were also lucky to have a visit from Harold from Modratec who is a bit of a signalling guru.  His knowledge certainly had your scribe going back to the drawing board with what he thought was the correct way to signal a layout!  Anthony organised getting the first of three planned lever frames and others present took advantage of Harold’s knowledge.  Later in the year we will invite Harold back to share his knowledge again – but we might be better armed with our questions next time.  I think he got off too lightly!
Discussions also took place surrounding the 2mm Scale Association Australasian Gathering planned for later in the year.  A 3D Rapid Prototyped wagon is planned for those attending to take home as a souvenir and a decision as to which, will be made in about 6 weeks.  Various options were discussed with some finding greater favour than others – and the N Gaugers were getting a say as they will have the opportunity to buy the wagon in due course and fit N wheels, providing they accept it will be at 1:152, not 1:148 (or even 1:160!).
Next month the dark art of wheel quartering using the 2mm SA jig will be attempted by David and I – hopefully with Graeme’s assistance.  TOUs will be back on the agenda sometime soon and the usual round of UFOs will be tackled along with DG couplings.
As ever, if you are a member of the 2mm Scale Association, the N Gauge Society or BRMA and would like to join us, please get in touch.
Posted by Sithlord75 at 7:49 PM No comments:

The last entry about the D120 Van coincided with my return to work after 6 weeks holiday over the summer and the resultant demands on my time have curtailed the pace of activity which had characterised January.  Still, all hasn’t been lost as I have managed to make some headway on the Cattle Wagon Saga which has been mentioned a couple of times previously.

One of the big attractions of joining the 2mm Scale Association was the availability of a variety of kits for similar wagons – indeed, if you are keen, there is over 10 different kits for Cattle Wagons available from the Association from 3 pre-grouping railways, 3 of the big four and BR (the GWR seems to be the one missing).   Compared with the offerings from N Gauge RTR manufacturers (Peco and Farish) the opportunities for variety in your train abound, especially since cattle were freighted reasonable distances to market or to farms following purchase and the wagon would go the distance, rather than transhipping the beasts.

The LMS Twin Pack kit (2-514 – see below) is one of the older kits for the Association being as it is injection moulded plastic, rather than etched nickel silver like the newer kits (which have been the subject of previous posts). 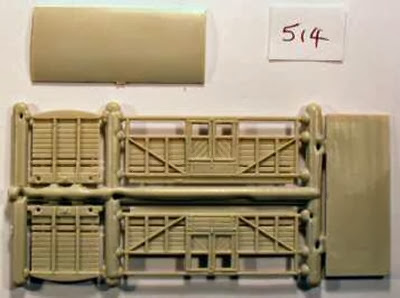 Now Ben had obtained 8 bodies (so 4 kits) in various stages of completeness via the Bay of E.  When he passed them to me to complete for him as part of a barter deal involving some GUVs only two of the plastic roofs as shown came too.  There was an etch (2-236) of roofs for LMS, MR and SDJR roofs which, considering the theme of his layout, seemed like a good idea – the 8th roof was made using a plastic van roof.

The problem with this kind of detail is finding out if the bodies you are putting the roofs on are, in fact, the right bodies.  Certainly the kit is for LMS Cattle wagons but which of the five etched roofs are LMS, which MR and which SDJR – and does it matter?

Well fortunately, Ben has these books: 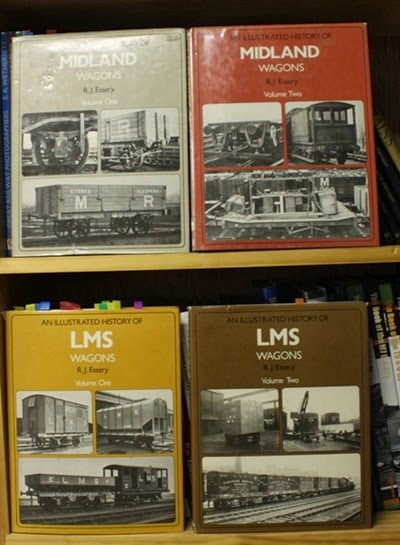 and on consulting them I was able to ascertain that the body is a MR design which was built by the LMS until they came up with their own, newer design.  Good.  Even better was I was able to find pictures in the MR Book which showed that all of the roofs (there are 4 designs for the 5 on the etch) are appropriate to use. 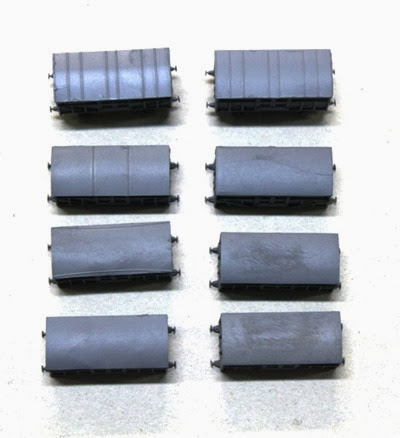 Top row – etched multi ribbed roofs (the only two which were the same on the etch) of which there was a photo in the MR book showing this roof type.

Second top – etched left, made up plastic right.  The plastic had a crack in it so will require some filler before it is finished.

The plastic roofs will need to be smoothed/filled before completion.  The plain etch has some bumps in it from the rolling process – not sure how as the other 4 rolled ok with no bumps and they were done first!

So even though there are 8 bodies the same, by using the various roof options available, a variety of wagons become possible – and as homogenous block trains were a thing of the future when the S&D was in operation, then it is a good thing.  Now to complete the chassis to go under them, then paint, then transfer…