It has been an age since I did one of these - and it hasn't been for a lack of actual modelling.  Rather it has been a lack of photos and a lack of motivation to turn on the computer and do something.  Now that I have organsied a laptop to take to the Man Cave (aka Train Shed) it should be a bit easier.

To kick things off, there is this photo of a pair of LMS Cattle wagons I built for a mate earlier in the year - how early?  Well he has been over in the USA for the best part of three months now and I got them done for him before he went...  They are the 2mm Scale Association etches running on N gauge wheel sets.  Painted with Precision LMS grey and finished with transfers from the N Gauge Society - although I seem to remember using some Ben had had printed here in Aus for the right hand wagon.  As keen observers will note (and now all readers will be keen observers!) there are some subtle differences between the two.  No couplings - Ben had to put these on himself and, I notice looking at the photo, the roof wasn't on square on the left hand one.   These are really easy etches to put together - I'll be doing some more at the Toowoomba Train Show on the first weekend of June so if you are visiting the Garden City and go to the show stop by and say hello.

Second item:  my first ever working locomotive chassis.  This was built from the 2mm SA replacement etch for the Farish 03/04 diesel.  Again, a really easy kit to put together.  The observant and knowledgeable will notice a few things odd about what I have done.  This is because it is going under a modified body which has had the Etched Pixels (or is it now Ultima?  Either will do!) skirts added to make it appropriate for the Wisbech and Upwell Tramway.  Hence no need for quartering of the wheels and, to save a few quid, the use of the solid tender wheels instead of the as required spoked ones.  I am going to get a second drive muff and gear so I can have two powered axles.  As it is, it runs very nicely in the test cradle but not especially well on the track so I have to do something about securing the motor better in the body.  In any case, it is the first so teething issues are to be expected. 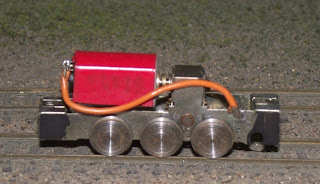 Finally, for tonight at least, the most recent wagon I have been working on.  The LMS liveried Chivers Kit of the Double Bolster.

As mentioned at the start of the month, I went and manned a demo desk at the Brisbane Miniature Train Show.  Naturally I was, like Caesar, ambitious with what I hoped to do.


To give some idea, I took with me the Chivers kits which appeared in the previous post, along with 3 Black 5s to renumber, 4 Dapol MkIIIs to likewise renumber and a few other bits and pieces.  Given that I was only there for 4 hours you can see what I mean about ambitions.

In the event, I did manage to get the black paint on the Chivers kits and made a bit of progress on renumbering the Black 5s.  There was also a lot of talking and I did have a look around the show.   As a modeller, I was disappointed, as most of the layouts were more toy train sets on steroids but there were glimmers here and there.  Given that it was a new venue, I suspect a few of the more serious enthusiasts had decided to give it a miss until they could have a look at the set up.  Maybe next year there will be a few more models.  Standout model was Esk, a QR layout modelled on the station of the same name in the Brisbane Valley.

Since AMRA I have managed to get some transfers onto the Chivers kits - but having decided to do them in LMS livery I have found this takes much longer than doing the same for BR.  For one, there is more transfers to put on and for two, I have managed to find some pictures of prototypes on preserved railways so I am trying to mimic these - but this has its one pitfalls, chiefly that the NGS transfer sets for LMS wagons do not include the right numbers so it is a cut and paste job.

In a couple of weekends, the Toowoomba Train Show is on - I am hoping to go and take the collection of 2mmSA etched kits that I have promised a mate I'd build and get stuck in.  In the meantime, I will hopefully get some pictures up on Friday night - and try to bring back the Friday Night Update!
﻿
Posted by Sithlord75 at 10:56 AM No comments:

Where has the time gone???

"An extremely busy end to 2012 on the domestic front saw less trains being done than I had planned - stuff happened, but more often than not I didn't get around to photographing what I did. I do have some which I will upload in coming days."
I wrote this back in February.  The title hasn't changed and is more accurate than ever as it is now the 1st of May and I still haven't done anything about blogging.  However, new month, the start of the show season in Queensland is this weekend and a new resolve.
As mentioned, the first show of the season kicks off on Saturday.  This is the 36th Annual Brisbane Miniature Train Show run by the Australia Model Railroad (Railway? Not sure) Association - AMRA - and for the first time in my memory (and I have been going for many years!) it isn't at the Brisbane RNA Grounds (it was originally I am told at Brisbane City Hall and I probably went, but that was some time ago).  It has moved to a new venue at the Doomben Race Course.  How this pans out remains to be seen.  The other big change, not of AMRAs doing per se, is the show is now a 2 day, not 3 day show.  Again, for as long as I can remember, the AMRA show was on the May Day Long Weekend (Bank Holiday to the Brits reading this) but the Government last year (actually it was the outgoing Government who started the idea) moved one of the Holiday's from this time of year to October.  (The original plan had the June one for the Queen's Birthday going but it was felt the May Day one worked better as it was so close to 25 April which is the National Holiday for ANZAC Day.)
In keeping with past years (at least past years when I was in Brisbane) I am going to be demonstrating various techniques on the British Railway Modellers of Australia stand.  However, I am only going for a half day rather than the whole weekend as I have done in the past.  Too much other stuff on.
To give me something to do, I have been making some LMS wagon kits by Roger Chivers.  These were out of production for a while but a batch turned up on eBay a couple of years ago so I snapped up a few.  Nothing fancy in the making - followed the instructions - and they have since been painted with Phoenix LMS Grey paint.  The other examples I have are in BR livery but these are intended for a different layout than my current one, hence the change.

Left to right - Peco 5 plank wagon (I had one so...) 4x LMS Tube wagon, 2x Plate and 1x double bolster.  I have another double bolster but the white metal buffers weren't usable and I haven't gotten around to getting some brass ones.
So, all things being equal, a picture next week (or more than one) of the finished wagons.
Posted by Sithlord75 at 9:56 PM No comments: