As I have mentioned in a couple of previous posts, I obtained one of the Atso-Cad Shapeways 3D prints for an N2 along with a bunch of other stuff.  Now none of the things I purchased were anything which I was in a position to complete straight away – the locos needed chassis and the wagons likewise – the N2 was the closest and, being a little impatient, I didn’t wait and got stuck in. 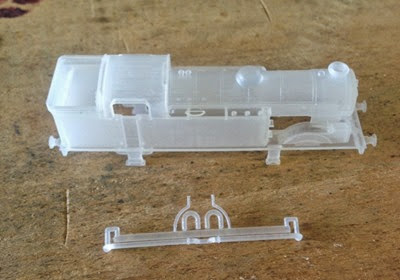 The picture above shows what you got for your money from Shapeways.  The bit at the front provides the pipes for the condensing apparatus which was fitted to those locos which were shedded in the London region to enable them to work in various underground sections.  If you don’t need these, then three holes – which can be seen on the forward part of the tank side – will need filling with milliput or similar.

So being impatient, I hit the body with some grey primer to see how it looked.  Not bad really.  You can see the stepping on the boiler and the tank sides but it is fairly fine in real life and doesn’t take a lot of effort to sort out.  From here, I did some light sanding with various grades of wet and dry, gave the whole lot a scrub with some Jif and an old tooth brush and then primed again to see how it was travelling.

As I was pretty happy with the look of it following the second priming coat, I started to add the detail.  The first bit of the condensing pipe work was put on the tanks but the hand rails have to be done before the second bit so I got on with those.  25 holes later…

Handrails are one of these things that tend to end up being a bit over scale and these I expect are no exception – I used 0.2mm wire in etched knobs – but to leave them off would be worse I feel.  In this case, the tank hand rail is on the side – some locos had hand rails on the top of the tank and a couple of pictures I found had them in both spots.  The location also moved around depending on the period – and within periods.  Photo references are a must if you are wanting to be spot on for a particular loco.  As I hadn’t picked a number, I went with the holes Steve had allowed for in the print.  The knobs were fixed with super glue.

According to Shapeways, FUD can withstand temperatures up to around the 80C mark – I solder at 375.  However, I felt that a quick in and out with possibly a higher than normal temperature to ensure a quick bond would work and so it proved.  I did the hand rails with the iron at 400 and had no dramas with melting.  A couple of knobs needed to be reglued but I am not sure if that was a result of the heat or a result of not having stuck them in properly the first time.

Having completed the hand rails the last bit of pipe work was stuck in, the whole lot primed again – which has had the effect that the sides are very much losing the stepping under normal viewing although I noticed in the photo that the bunker side in particular is still showing.

The primer was left to dry for a day and a half before I sprayed it with gloss black.  I still hadn’t decided if I was going LNER or BR but in either case a black loco was the go – I use rattle cans for basic colours and whilst I have LNER Green from Precision Paints, I wasn’t setting up for painting one small loco – the other couple of things I want to paint LNER Green haven’t got to the painting stage yet.

The gloss black was left for 48 hours and then the really fun job of transfers started.

I used Fox for this one and settled on BR mixed traffic as I didn’t have the means to do any LNER – other than the lettering.  The Fox system involves putting a black transfer over the red/white one to separate the lines but having done a trial I wasn’t impressed with the look so removed it.  One of those cases where, to me at least, the right way looked wrong, but the wrong way looks right.  The number chosen was picked for two reasons – one, the loco was based at Hatfield, which is the other end of the GNR branch from St Alban’s and, while I don’t have a picture of an N2 at St Alban’s, it is at least plausible that this loco made it down the branch at some point.  The second reason was it used 5 different digits!

So this is the state of play at the moment – the buffer beams have been painted red and the whole lot coated with gloss clear to seal the transfers in.  Next problem is a chassis.

Steve Da Costa suggests putting the loco on a modified Farish Std 3 Tank chassis.  I have a Std 3 (well had is probably the more accurate description now) and so I pulled it apart and made a start on hacking the chassis.  Pretty soon in, I found that the biggest issue was the wheel spacing was wrong – and the biggest glaring error to me was the Std 3 has its wheels more symmetrically spaced than an N2.

So no wheels at present – I am considering using the parts to make a chassis with new connecting rods but a better solution would be an etched chassis.  As it happens, I am hoping Steve releases his J50 soon to the general punter and it has the same wheel base and spacing (albeit with wheels one foot smaller in diameter) as the N2 so an etched chassis would work for both potentially.  The sticking point there will be that while I can get wheels from the 2mm Scale Association this won’t help for an N gauge layout.

It is a cracking little kit and highly recommended – I have a Langley one from 20 years ago and this really shows it up for the compromise that it is.  An LNER and GNR (!) pair will follow, once I work out a suitable chassis arrangement.

No photos this month – too busy!

The usual monthly meeting took place at your humble correspondent's shed last Saturday with 6 starters and one late comer in attendance.  There wasn’t a theme to this month with everyone working on various projects.

Kicking off – I was working on my Atso-Cad designed N2 (which should be the subject of it’s own blog post hopefully next week, weather willing).  I am still in a bit of a bind when it comes to the chassis for it – more of which anon.

Ken (a returning member – he had N some years ago then dallied with Suger Cane Trains and Trams but is now back) was building a Scalescenes Factory/Warehouse (T026).  He has actually combined two kits to get the size he is wanting but was commenting on the number of windows he had to cut out!  This prompted a discussion on obtaining the windows themselves (OHTs are pretty old school now with data projectors so sources are drying up) and how they could be made to be different colours (currently they coming in any colour you like, so long as you like black).

Anthony made a start on something a little different – a rolling stock kit.  He has obtained a couple of the Etched Pixels LMS Fish-X kits to go on the N Gauge Society Stove R chassis.  Compared with the 2mm Scale Association ones, these are a doddle to build and hopefully we will see them close to completion next month.

David had managed this month to bring along the various parts to the 2mm SA quartering jig but still failed to achieve success owing to bending a couple of things which he didn’t have replacements for.  However, he was able to make a start on his Shapeways GWR Cattle Wagons with a view to painting them at our next meeting.

Barbara and Don continued working on their collection on wagon kits with some progress being made on their NGS kits which I had made examples of last month.

Ben, coming late (but in time for a feed…) didn’t actually get anything done but fortunately did bring with him his ultrasonic cleaner which will make the sorting of chassis for Cattle Wagons, bodies for Cattle Wagons and assorted other kits which I hope to do in the next few weeks a bit easier.