Last year, as long time readers will know, I built a cattle dock in 2mm Finescale and then built a diorama to display it on.  This model (well both actually) won at the BRMA (Q) modelling competition (the cattle dock for Line Side Structure and the diorama for the Diorama section).


As part of the mission to learn new skills and practice old ones, the N Gauge group which meets here at my shed once a month (members of the NGS, 2mmSA and BRMA are all welcome to come along and join us - please get in touch if you are interested or visiting Brisbane at any time) we decided to build A4 sized dioramas this year.  There isn't a prize involved and there isn't a time limit, although there is a tentative deadline of our Christmas meeting in December so that action takes place.  Rather it is about having a go and do something to as high a standard as an individual is presently capable of.  Assuming someone does something which the rest find to be of a very high standard, then that person has to share what he or she did.
Various ideas bounced around my head, mostly of a county setting.  A level crossing on a single line branch was considered as was a culvert running under an embankment.  Discussions with my wife had her suggest an urban theme along the lines of "Swallow Street" - my 2010 3rd rail layout which was on RM Web.  I had decided to scrap this and rebuild it when we got home from Longreach as I wasn't particularly happy with it - mostly because I had made it out of scrap bits and pieces from the woodworking classroom at LSHS and I had not had access to my complete range of tools and bits and pieces.
So going with this idea, and armed with the various diagrams of track and building clearances in the 2mmSA Yearbook, I commenced.  Progress has been slow but I have got the board done, a set of platforms (correct width) in and sorted out the track height.  Next is to do something about the street level (train in a drain being a good description of it) and then I can start decorating.  Just need a good name for it now.
Photo of progress below: 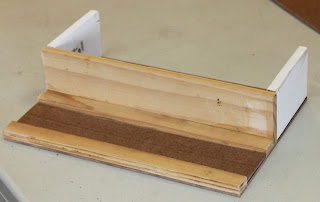 Where has the time gone???

Long time no blog post. Where has the time gone? Well, work for one was pretty busy after the last post as I gained a new class (and lost one of my originals) so I spent a bit of time working out where they were at and getting them up to speed with my other Year 11 Class (shout out to James here as he tells me from time to time that I haven't updated the blog - wonder when he will notice this??)and then it was exam prep, then exam block, marking and reporting. Long days (which in part is why we get so many holidays - we actually do end up working better than 40 hours a week on average as teachers!).
So what if any railway stuff has been happening?  Well quite a bit, but not too much which is photogenic (and certainly isn't at 9.14 at night - hopefully some photos at the weekend).  I stripped all the wiring out of St Alban's Priory a couple of weeks ago as this had been a rushed job in the first place, back in 2000.  I had accepted an invitation to an exhibition and had 4 months to finish the wiring (scenery was substantially complete at the time although there have been subsequent modifications and changes) when good old EQ decided to send me north to Sarina State High School for 8 weeks...  This meant I was busy doing the wiring until 3am a couple of morning prior to my departure and the job was more a case of "it works" rather than "it is neat, organised and tidy, and it works".  Fast forward to 2007, and having gained my train shed, I made a start on fixing it all.  I got the new control panel done for the yard (which enabled hands off shunting to be performed from the front of the layout where you could see it all happening, rather than from the back where it was difficult to line the droppers up with the magnets owing to sighting issues) done and then good old EQ posted me to Longreach for 4 years...  So now, with no chance they will post me anywhere which will require a house move, I can finally get in and sort it all out.  As it happens, the next LAG meeting is on Saturday and there will be a bit of a rush to get the two mainlines wired and running but I can get something up for the gathering and then progress from there.
I have also been making new stock trays for the storage system I have in the shed.  These are 33% bigger than the previous ones meaning that I can fit 80 Peco 10' wagons or 24 Mk 1 coaches in each tray.
Finally, I have made a start on a diorama for the LAG Clayton's Competition (the competition you have when you aren't having a competition!).  We decided as a group challenge that we should strive to build a diorama with a footprint of an A4 piece of paper back in May with the finished (or almost finished) examples being on display at our last meeting of the year.  I had a number of ideas for mine but following discussion with the 2mm Shop 1 Groupie (aka SWMBO etc etc) I changed the idea at the last minute and moved away from the rural scene I first envisaged to a urban one instead.  I'll get around to taking some progress shots of this and up loading it in the next day or so.
Posted by Sithlord75 at 9:28 PM 2 comments: