OK, seriously I am not gloating - I wasn't even there to see the quality of the competition.  We had storms in Brisbane on the day of the comp and I was on a light aircraft and so didn't actually make it to the venue until mid afternoon by which stage the only models left were mine!!!  However, I did manage to win two trophies - one for the fourth time which was special as it was the one I was most wanting to win - and one for the first time,  which is equally special as I hadn't entered that category before (mind you, I was amazed that my Fleetline Garratt was judged the best in the category for Kit or Scratch built locos against some 7mm models.)
The model which got me the modified RTR trophy for the 4th time (under the rules of the competition this is the most times I could have won it in the last 9 years) was one of my Peco Jubilees.  The blurb I included with the model is below:
Category B – Modified Ready To Run Locomotives
Scale:               British N Scale (1:148)
Prototype:       BR (Ex LMS) Jubilee 45565 “Victoria”
The model:      Peco by Riverrossi. The model started life in post war LMS Black livery and was un-numbered and not named.  It has received a complete repaint into BR Express Locomotive Green.  The lining transfers are by Model Master with an etched brass nameplate produced by a modeller in the UK as a bespoke job have been applied.  Extra details include: lamp irons, head lamps (Class C for fully fitted freight/parcels/milk traffic), screw link coupling on the front, brake pipes front and rear, glazing on the cab forward and side windows (Krystal Klear), real coal in the tender and a crew.  The tender has had turned brass vents to replace missing plastic ones (the model was purchased second hand in 1996, some 20 years after production had ceased) and the rivets taken off to represent a welded tender, one of which was fitted to the locomotive from 1936, although this one, in Green with the Crest, would be numbered 10152 – assuming you could read the plate on the rear of the tender! – and fitted in 1961 (or it could be 9696 fitted in 1946 and presumably painted lined green with the Crest at some stage prior to 1961).
My wife kindly took some pictures today while I was refereeing the kids.  She did manage to a) drop it and b) remove one of the crew in her attempts but fortunately nothing terminal.

I'll get around to photoing the Garratt in due course.﻿
Posted by Sithlord75 at 10:18 PM No comments:

Next weekend (17 November) is the BRMA(Q) Annual Model Making Competition (AMMC).  Now in its 9th year, there are 7 categories for competition from which an overall champion model is selected.  I have been a keen entrant pretty well every year (there was at least one where I didn't have time to finish models in the categories I was eligible in - you can't defend your trophy as winning makes you ineligible for the following year's competition) usually in the modified RTR categories (both locomotives and rolling stock) and in the kit built rolling stock section.  Last year I managed to win the scratch built line side structure and diorama sections.  To date I haven't entered the kit or scratch built locomotives nor modified line side kit sections.  My plan was to do both, along with the three other categories I was eligible to enter.
Well time and what not have conspired against me getting the modified line side kit model done - I had planned on modifying the Kestrel semi-detached house kit, having been inspired to have a go at it by an article in 'Nspirations 3.
The rest are sorted.  I have two entries in Category A for the first time ever - a Skytrex/Fleetline LMS Garratt as BR 47975 and the Knightwing kit for LMS 10000.  For Category B - the modified RTR locos - I have finished off detailing a Peco Jubilee which was repainted into BR Green some years ago.  Category C (the kit or scratch built rolling stock) sees a NGS Sealion paired with a Shark from the same supplier (you have to have two wagons or one coach) as one entry and a pair of HBA hoppers as barrier wagons for a FNA Flask wagon - all from TPM.  As the rules of the competition state there needs to be at least two modellers in the competition, I have decided to put my ERG conversion of a GNER TGS MkIII into the Prince of Wales Saloon from the Royal Train.  I don't expect it to rate highly to be honest, but hopefully someone else who has made a significant effort with their models will be recognised as a result.
10000 was finished today - one week early - along with 45565 (the Jubilee).  47975 has been finished for a while - I had planned on entering it last year but realised on the day it only had numbers on one side so felt it would be a bit of a con to put an manifestly unfinished model into the competition. The wagons have similarly been ready to go for a while - I was ineligible for Cats C and D last year.  So one week to go - results next week.  In the meantime - a picture of 10000.

Something Different - Object A, Part I

I received an email from a mate of my father's a couple of weeks back seeking help on a railway matter.  My dad, bless him, had decided I was a suitably qualified person to approach for said help which turned out to be a question regarding painting and lining a locomotive.  Would I be willing to have a go at it?
The model in question is photographed below: 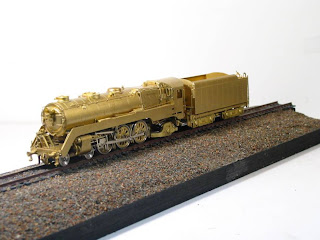 This is a C38 class Pacific of the New South Wales Government Railways.  The first 5 of the class were semi streamlined - see elsewhere for my model (which hasn't progressed I'm embarrassed to say) and the last 25 looked like this, albeit in various shades of green with varieties of lining and smoke box colour; a real engine pickers nightmare.  Further queries established it was HO (which I expected since John doesn't model N!) and is a Samhongsa ﻿Model from Korea.  I was willing to give it a go and, having spent a weekend in Sydney visiting Phil Badger (BadgerBits Generalissimo) and getting the low down on colours (pretty well every shade of Green seems to be OK!) I invited John and his wife over for a BBQ to inspect the model and see what could be done.
The result of a couple of afternoons with the spray can and then a few evenings with the paint brush is below: 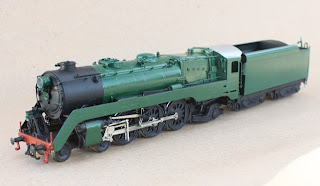 I am very pleased with it generally - although the silver roof needs to be redone as the brush marks show up too much for my liking.  Now there is the matter of lining it out in red and yellow and putting 3830 on it.  The general idea is to match this: 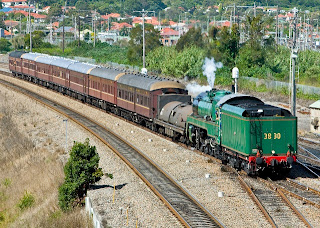 (I have searched via Google for the original as I would expect this to be on the net.  I couldn't find it hence posting the picture rather than the link.  If someone knows the copyright holder (who most assuredly isn't me!) could you pass on his or my details in whichever direction so I can seek permission - or alternatively, point me at the web address for the photo and I'll take down the photo and put the link up in its place.  Thanks)
﻿
Posted by Sithlord75 at 6:47 PM No comments: