Once upon a time – or perhaps “A long time ago…” is a better start! – I regaled readers with the tale of my sorting one of these here.  As it turned out, I never did get around to sorting the transfers and what not for the 2015 modelling competition and with the 2017 running late and being held in a couple of weeks, I thought I had better do something about it – if for no other reason than to provide a second or third place. 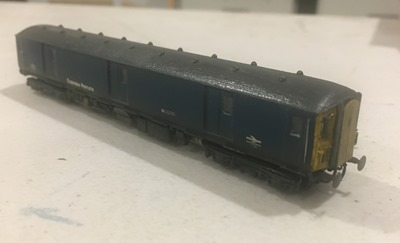 So what’s changed?  Well I got some transfers for the Parcels service to put on it, put the handrails in (Spirit Design out here has a nifty tool for handrails – unfortunately the owner of said nifty tool has now moved 1000kms south so I might have to get my own), glazed it with Krystal Klear and weathered it all over.

Depending on the lighting and the angle you can still see the print lines but all in all I am quite pleased with it – just have to sort a DCC chip for it and get around to building the 1975-1982 themed layout for it to run on.  But another UFO FO’d so that’s a result.

Vessels for “Hollie Wharf” – Part I

Long term readers will possibly remember back in 2016 I was given a shunting puzzle layout by one of our on again, off again LAG members (currently heading back on again which is a bonus!) and my daughter, keen as a bean to return to the Toowoomba show after her debut as an operator in 2015 was given nominal ownership and as a result it was christened Hollie Wharf.

It has been to two Toowoomba shows – 2016 and 2017 – and may go again this year depending on whether or not the planned replacement “Celyn Glanfa” is ready in time (you can look up the Welsh if your keen – and if you are Welsh and don’t like Google Translator's answer, please get in touch with a better one!) although there is the complication that the magic smoke seems to have escaped somewhere late on the last day of the show last year (which is one of the many reasons I am glad Ken is back into British N for a bit as he has offered to trouble shoot his home made circuitry).

Now, being a wharf Hollie and I both felt it was important to have a vessel or two to have at the dockside.  Again, long term readers may remember (and you can certainly hunt back to 2016) that there was some detailing bits done with my Aldi 3D printer.  One of these bits was to make a start on converting an Ertl push along Bulstrode the Barge from the Thomas the Tank Engine collection into something more like a costal steamer.

I have fortunately obtained a second one from the Bay of E for not a lot and, this time, have managed to remember to take more pictures of the process.  The modification is by no means complete but I thought a Part I would be useful – if for no other reason than to make me get a move on so Part II gets done!

Below is what I started with.  It comes apart easily by removing a few screws from underneath 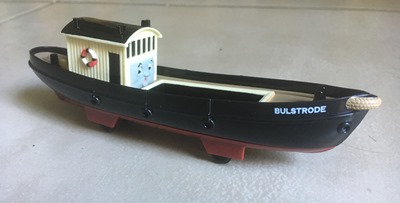 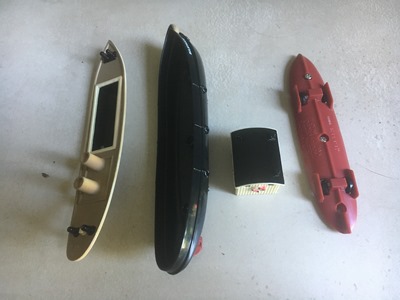 The component bits.  I chucked the wheelhouse as it is over scale.  I also chucked the bit with the wheels in it as being no use to any plans I have nor could I see how it would be useful in the future.  Hope I don’t regret that.

Having dismantled everything the hull section looks like this.  Not particularly useful if you want a waterline model but I have a bench sander and, having fitted it with a worn fine grade belt, I took it down to the waterline pretty quickly and easily.

The deck insert was next – before on the left, after on the right. 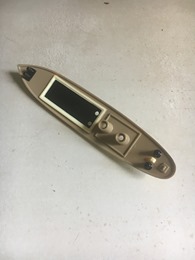 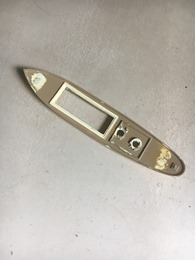 I removed the bollards (dunno what else you’d call them) from the bow and stern, cut a hole where the cargo hold is and trimmed down the lugs which had secured it all together.

So I now have a hull ready for building onto.  At this stage, this vessel, tentatively named Ruby, is going to be a sister vessel to the one we already have, the Amity.  Both carrying coal around the coast from wherever Hollie Wharf is.

Now to sort out the 3D printer and find the print files for the new bollards!

Last week I wrote about the two DJM mermaids I received from Hatton’s and indicated they’d be joining the UFO pile to be back liveried into black from Civil Engineer’s Dutch.  Well as it happens, I got onto it much sooner than I thought particularly when I found that removing the bodies for painting wasn’t that much of a hassle – a few minutes careful prising with a steel ruler and voila.

The now removed bodies were spray rattle can black and left to dry for a day or so before transfers from the Model Master range which used to be available from the N Gauge Society (sheet 2633 which has options for Dogfish, Catfish and the Mermaids.  I used to to redo some Railhaul (I think) liveried Dogfish back to black years ago – I hope I can get some more as I have 11 Catfish etches to build). 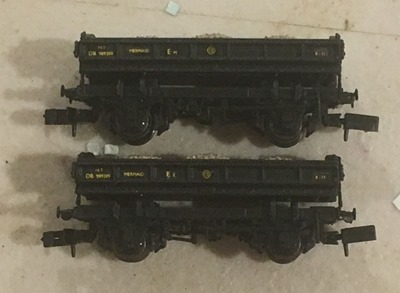 So after about 5 minutes of dismantling, 5 of shaking the spray can then pointing and shooting, a day of waiting and an hour putting 10 transfers per wagon on, I have what I wanted – two black Mermaids to join the Grampus, Dogfish and Shark on the engineers possession train.