As David says right at the end - it does indeed work.  Warms the cockles it does.  Now to get Swallow's End to a similar state of activity...
Posted by Sithlord75 at 10:51 PM 1 comment:

Same day report – don’t get used to it!  (And yes – apologies for not having one last month at all!)

6 of us gathered at a new venue (well new in the sense we haven’t been there as the LAG before but only one of us had never been at all) today where the highlight was the presence of David’s 2mm layout of which video was shot – more of which anon. 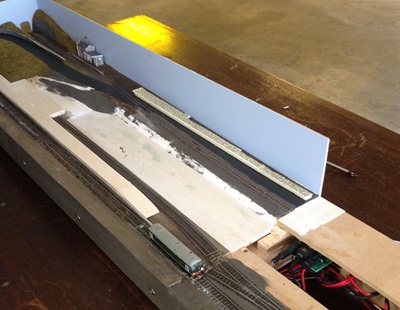 Some discussion was had around the 2mm scale layout Greg has out the back of his place having obtained it from estate of the bloke who introduced him and I to 2mm Finescale in the first place.  I suspect that 2016 could see it finally getting done, some 13 years or so after Andy’s unfortunately early departure from this life.

Once modelling got underway, all of us worked on our various projects. 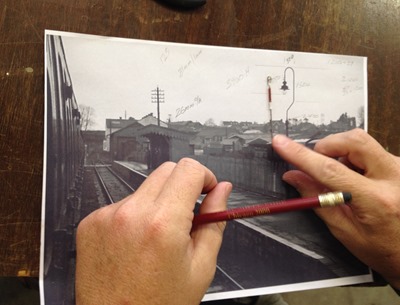 Ben and Greg did something about replicating the lamp posts pictured at Sturminister Newton for his layout.  You guess the height of the fence, do some drawing and some scaling, bit of maths then get a paper clip, some bits of plastic tube of various outside diameters, a sequin and bead and voilà – lamp post.  The assembly judge it pretty good but felt the lamp was too close to the bend so some tweaking needs to be done for the production run.  Still, not bad for half an hour!

Barbara continued on with her N Gauge Society GWR wagon project, this time doing the opens which come as part of Kit 48. 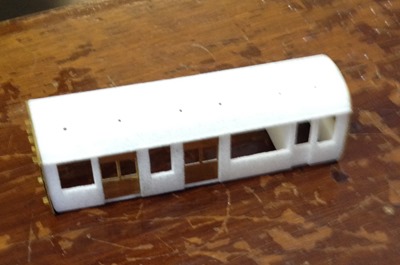 Don kept on going with his pair of GWR Milk Brakes from Etched Pixels – I think this is the second of the pair under construction but I forgot to ask.

David, flushed with the success of the running session, got the servomotor for the fourth point mounted and wired.  It now just needs the blades installed and the programing done and he’ll have the ability to run around a train.  Next month…

I carried on with building the Severn Models Semi-detached Houses (N7 in their catalogue) of which I obtained 8 examples as part of their Kickstarter Campaign last year.  I decided early on based on their published dimensions that they were more suited to terraces than semi-detached and so I am building them as a terrace of 2 up 2 down houses.

So a very productive get together.  Next meeting is the 11th of July.  Hopefully I will have Swallow’s End running for that one so we will have two 2mm planks operational.

Last weekend was the annual Toowoomba Model Train Exhibition.  We have been going up for a number of years now and always have a great time.  This year was no exception but it was notable for a couple of reasons.
Firstly we debuted Ben Lawson’s Sturminister Newton.  His blog is linked on the side bar to the right so you can have a look at what he has been doing.
We also had two new members of the operating team join us.  David has been part of the LAG since its inception back in 2012 but was unable to join us last year when we returned to the circuit.  My eldest daughter, Hollie, came too.  She showed an interest in shunting which surprised us all although there were some rather heavy shunts from time to time and the occasional out of control locomotive (although this was ultimately traced to a loop in the controls which had the loco responding to two controllers rather than one).  Considering she hasn’t turned 9 yet, to last a day and a half with two very late nights before losing interest and playing with some of the other kids in attendance was very good.  Hollie was invited back next year – hopefully she will have her own loco to wear out rather than using one of mine! 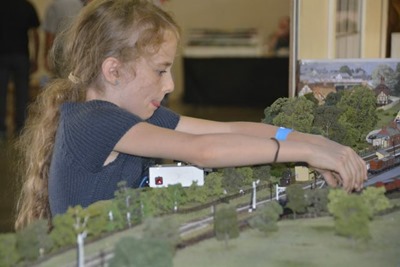 Hollie hard at work
Exhibitions are an interesting thing.  Before we went, I had read Julia “Missy” Adams blog (also linked to the right) where she had asked if exhibitions are worth it.  I know there are a lot of differences between the Australian exhibition experience (well at least mine here in SE Queensland) and the reported experience in the UK.  Over here, you don’t get paid to attend a show as an exhibitor.  In fact, the Toowoomba one is one of the rare ones where, provided you are willing to accept the hospitality on offer, you can be out for as little as the petrol getting to and from.
Normally exhibitions will have unlimited supplies of tea and coffee (for given qualities of same – catering packs rather than freshly ground and made) and provide lunch and that is it.  Toowoomba does have accommodation (you get to stay in the hall – showers etc. are available) as well as a hot meal on set up night, continental breakfast (I think there was 5 different cereal boxes for those inclined with a BBQ plate provided for those wanting to cook their own hot brekkie), morning and afternoon teas along with lunch.  Dinner Saturday night was a three course meal for a tenner.  Obviously if this isn’t to your taste, then you are on your own.
In contrast, my understanding of the UK scene is that petrol and hire of vehicles and accommodation are all reimbursed – I would imagine that presenting Ritz receipts may not get you invited back – and meals are supplied.  As such, a weekend playing trains, results in those playing not being out of pocket at all, or possibly less than the average Aussie enthusiast.
And then there are the punters.  Missy reportedly had a less than delightful experience at the hands of some paying customers who felt her efforts weren’t up to what they were expecting (dunno exactly what they were expecting – the photos of her modelling are inspiring enough.  Assuming it works as well as it looks…).
In this respect we share something in common.  The punters here will also express disappointment that the layouts are not what they are hoping to see for a variety of reasons.  For example our layouts (mine, Ben’s and our third partner in crime, Greg’s) are all set at a height of 1200mm from the floor – plus levelling materials.  Sometimes this will put the layout much higher as some of the floors are less than ideal and the layout is over 10m in length.  Additionally, with a layout that long, and two 4m scenic sections broken by a 20 road traverser not to mention the run along the back of it all, there are times when there isn’t a moving train in sight.  Given that all three of our locations are based on real ones with tweaking (the chief tweak in all three cases being the introduction of duplication to the line – all were single line originally but are modelled as two track mainlines) it is a bit hard to give them the endless snake trains which many of the other N scale modellers seem to want to do.  However, we are still more than happy to go.
The main driving reason for going to a show is the opportunity to play trains.  All three of us are able to have our layouts set up at home – Ben and I have ours permanently up in garage and shed respectively.  Greg usually has his up under his house.  However, the opportunity to run them as designed with a lot more trains available to run through the seen is rare and tends to only happen at an exhibition.  We understand that some people don’t like what we are showing – it can be a variety of reasons such as wrong country (UK), wrong scale (N), wrong motive power (steam normally!) or lack of anything “interesting” running.  (We try to run typical British trains – as Stur is SDJR based, things like the Pines Express and Standard 5s were in evidence along with 4Fs and so forth.  We also try to run them at scale type speeds so it can take 2 mins for a lap – and that’s a 60mph express!)  So we get our fair share of sniffs, snorts and asides.  However, we also get a lot more people saying how good it looks, and, because we have pictures of the real place, lots of people are interested in how we have modelled something which, in all three cases, doesn’t exist anymore (well St Alban’s Abbey station does, but not like mine!).  All in all, we feel that it is worth going – and especially worth going up the hill to Toowoomba.
Posted by Sithlord75 at 1:21 PM No comments: