I had hoped to have news that the trackwork on Swallow's End was "finished" but unfortunately I have fallen short of my goal for this weekend.  At the start of the weekend I still had 5 points and about a yard of track to construct.  At the time of writing, 4 of the points have been mostly done (the switch rails are missing until I have built TOUs) and the 5th is about 12 timbers away from getting rails put on it.  The track which is missing is down to the bits of fill around the 5th point.  The photo below tells the story.  I would guess about 8 hours work for the weekend, comprising Friday evening, some of Saturday, Saturday evening, a bit of today (Sunday) and this evening.  I would expect about an hour, hour and a half would see it at the point where all the plain track was in place and the last bits preped for painting.  The points will be removed so I can check all the plain track for shorts and do the points on the workbench where it is easier to go sleeper by sleeper (or more correctly, timber by timber) to ensure I have done the breaks properly.  Then it is a case of working out a TOU and fitting the points, wiring it all up and...  sorting a locomotive!!! (Late news on this - Shop 3 has the stuff I need and order has been place - stay tuned!!)  The TOUs won't be done until March (as I won't be getting anywhere near a hobby supplier until 25th Feb) so in the meantime, there is ballasting to do and a start on the scenery.  Somewhere along the line I will do something about my traverser as well. 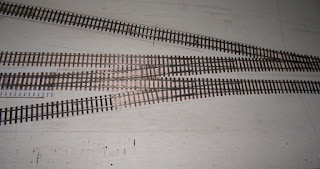 The bit which took a fair bit of time - sorting out the timbers in the gaps around these three B7 points.  I will try for a better photo tomorrow afternoon in daylight.

The whole layout - the end of the run-round loop is actually done but isn't fixed in place yet, owing the the point not having been finished.  It is done however and it is only the point and approximately 5 or 6 sleepers of exit to the buffers to do.

Sorry for the late running of the Friday Night Update.  Truth be told, I didn't think there was much to show for my efforts and I wasn't going to update at all but Amity said seeing the progress and having an idea of time involved is one of the things she likes reading on people's scrapbooking blogs and so...
I spent approximately 6 hours over the weekend getting the 5 remaining points sorted.  This involved cutting 180 sleepers to the correct length (having printed out some B7 L and R points from Templot) and then making a start on putting the Versaline chair plates on them.  By knock off time last night I had got to the point where 2 of the 5 points had been thought the chair jig and were double sided taped down to the templates for fettling of the chairs (I find I have to fiddle with some - not sure why but I suspect it has to do with the fact the Versaline system works on 31 timbers and Templot 30 for the B7.  No, I don't know why they are different either!).  The other 3 point are in the loose stage of timbers waiting their turn on the production line.  So 6 hours down, no rail soldered to anything and I reckon a good 3-4 hours to go to get them to the point of test fitting on the layout.  Then there is the not insignificant matter of the TOU...
The photos below show the story. 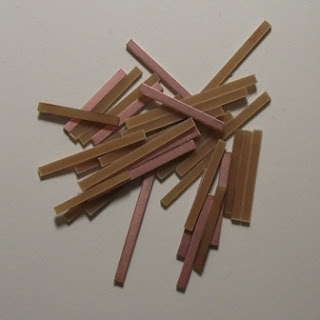 Sleepers cut ready to lay out 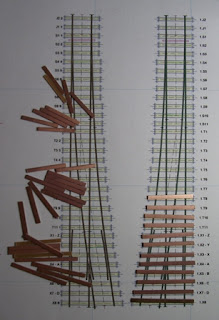 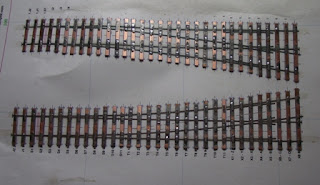 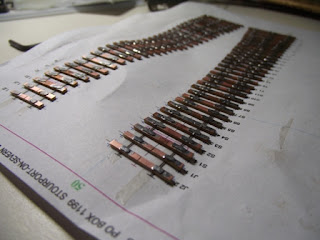 Waiting for rail 2 (the wave is prototypically Queensland at present!)﻿
Posted by Sithlord75 at 8:51 PM No comments:

Amity and I started ballasting tonight.  While the track isn't complete (Parcel 1 of 2 - the missing one - turned up on Tuesday so track work is back on tomorrow evening I hope), Thursday Night is Train Night in the Knight household - and we both do "something" model railway related (just to make it fair, Tuesdays are spent Scrapbooking).  About the only thing we can both do until I sort out (ie tidy) the work bench (I now have one which isn't the dining room table!) is ballasting so we started.
The ballast is the Woodland Scenics B75 Fine Grey.  First time I have used a proprietary ballast (previously it has been sieved sand and crusher dust) and first time I have ballasted before all the other scenery - it seems to be the 2mm way so I thought I would "go with the flow".
I made a start on the platform road - my efforts are shown in the picture.  The fact that the ballast isn't on the lower side (as you look at the photo) is because the platform isn't presently in place and so that bit will wait until then.  Amity made a start on the coal merchant's siding on the other side of the board as shown below. 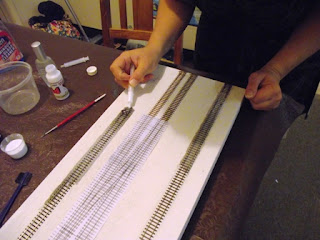 Further updates tomorrow in the normal Friday Night Update.﻿
﻿
Posted by Sithlord75 at 9:43 PM No comments:

The longest inhabitant of my UFO box was inspired by an article published in the Railway Modeller 10 years ago this month - I only realised it was 10 years when I went looking for the article to show Amity from whence the inspiration came.
In the January 2001 RM, there was an article titled "Traffic for Tickling" by Mike Smith in which he outlined some ideas he had for a milk train for his freelance Light Railway.  Mike was planning on using the L&Y inside framed van and Cambrian Railways milk and poultry van as his inspiration and, I assume, did the violence to the Peco 15' van which he proposed in the article to achieve same.  I wasn't going to go that far, but the idea that I could do something to enable a train of Farish 4 wheelers to use the Peco Elsie system without having to do drastic things to the Farish chassis appealed and so an Idea was born.
My idea involved using bits and pieces from the left overs from kits and mounting the resulting body on a Peco brake van chassis - which gave me the running boards.  In my case, I used the 10' version and a left over bit of roof from some Southern kit (Chivers I think - long since faded from memory what was used but the profile matches the Chivers CCT/PMV roof) and the filed down ends from the NGS Kit 18 D1646 van.  The top of the ends was filed to match the roof profile.  This was mounted on a spare floor, again from an NGS kit and the whole fitted to the proposed chassis.  Then nothing happened.  The plan was to use strip styrene to build up the slatted sides, load in some milk churns, fit the uncoupling arm and paint.  However...
Scroll forward 10 years and my visit to Brisbane last week and finally the strip was purchased.  I used the Evergreen range and for the 6 strips per side the 0.010" x 0.040" (code 102) was used.  The doors were from the V-Groove range from the same supplier (code 2050) which was purchased to make open planked wagon bodies (more of which anon).  The framing was done with the 0.010" x 0.030" (code 101).  To show the locking bar some monofiliment from a Ratio signal kit was used.
The pictures below distort it a bit - still working out the new camera!   I suspect this van (and the train which I have planned but have not started as such) will wind up behind something from the IoSR - like Thomas or Toby.  The livery is Humbrol 64 for the roof, 71 for the cream and 127 for the blue.   The paint is only a first coat so will be tidied up.  I suspect I will use some yellow transfers for lettering and numbering - MMT575 seems like a good choice. 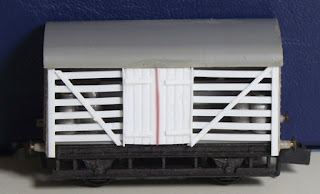 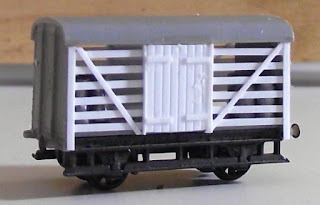 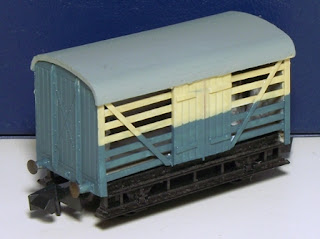 Long time no blog!  Come to that, long time no trains either.  As many would know there has been some significant flooding here in Queensland - Google will provide you with pictures and if you are interested, Google "Premiers Flood Relief Fund" and make a donation.  Every little bit will help.
Personally, I was very lucky.  Longreach's river flooded but the town was not, I was in Brisbane when the Brisbane River flooded but my parents were not flooded either.  The only inconvenience to me has been mail and perishable food.  On the mail front, two mail deliveries since before Christmas has seen Parcel 2 of 2 turn up from the 2mm Shop 1 but to date, Parcel 1 of 2 from the same place has not arrived.  Naturally the bits I really need are in Parcel 1.  The NGS Journal 6/10 arrived today (18th Jan). The parcel from Hatton's arrived in the other delivery which was on the 6th of Jan.
The other thing which delayed trains was the arrival of Lisa Lily on the 31st of December 2010.  Both mum and bub are doing very well - the Hatton's parcel referred to contained Lisa's Jinty which will be renumbered in due course to an LMS number rather than the BR one which it arrived wearing.
Today was the first day this year I did anything significant railway wise and I hope to have some photos and the story tomorrow.
Posted by Sithlord75 at 8:22 PM No comments: