I have had this model kicking around for sometime waiting, as seems to be the trend, for transfers.  Lots of kits unfortunately seem to be produced without transfers being obviously available (or if they are they only cover one period of the model’s life) and this one is no exception.   Luckily I have the Tatlow NPCS Book and it has the Python in it (handily next to the LNER Long CCT which Chivers does too – more of which anon) and the pictures give enough inspiration to get on with cutting various bits and pieces from other transfer sheets.  The only thing I wasn’t able to find was a yellow W of a suitable size. 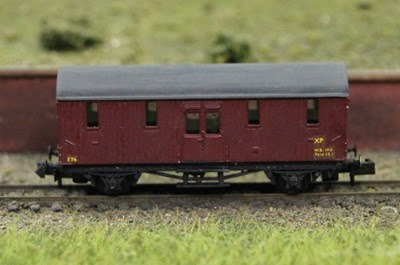 I haven’t put the sealer coat of varnish on the transfers yet and like the previous couple of Former UFOs, weathering to take place.

I have two more of these kits to build – one is going to be 580, the one specially strengthened to carry elephants but I am going to have to find a GWR Roundel transfer for that as the picture I have, dated 1947, has the vehicle in brown with a roundel!

Another UFO getting close to FO status – this time with a much shorter gestation period!

These LMS tube wagons date from 2012 when I saw some on eBay and purchased them.  They were duly made up in late 2012 and managed to get some paint on them in early 2013.  Since then, sporadic progress on transfers had LMS applied to 5 out of 8 sides, numbers applied to 3 out of 8 sides and that was it.  With 8 transfers per side (number, tare, Tube, L, M, S and a pair of small Ns to denote non-common user) I was well behind! I found them again during the tidy up period mentioned in pervious posts.

Transferring recommenced Thursday night and the models were completed over the Australia Day Long Weekend.  The models were then sprayed with Humbrol Matt Varnish out of the Humbrol rattle can – not overly disappointed with the fact the black is now looking more battleship grey as it starts the weathering process.

As I have mentioned before (way back in 2010!!) I have never been especially successful in getting the Chivers chassis to run well and these have proven to be no exception to the rule.  The kits came without wheels and I know the Parkside Dundas 6.2mm diameter ones are recommended but I have found a tendency with my Parkside wheels to come apart with the tire falling off the plastic centre.  Wheels therefore have been a bit of a problem for me.  I have tried a number of different manufacturers and, owing to my cack-handedness with building the chassis (previous LMS tubes in BR livery run on 2mm Scale Association etched replacement chassis – I can see already this happening with these – doubly so considering I will then be able to easily fit DGs and later 2mm wheels) there is a variety of wheels fitted, all in an effort to get them to run smoothly.  The best ones are a single pair I had which don’t match anything else in my bits box and I don’t know the manufacturer. 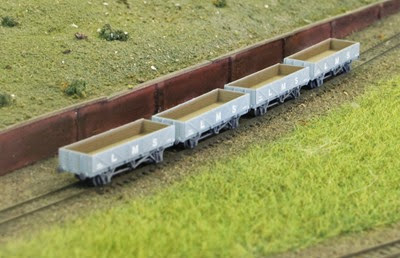 As with other UFOs recently FOd, they haven’t been weathered.  The weather hasn’t been good for attempting to spray anything over the summer – too wet and humid – and with the desire to emulate Tim Shackleton, some practice on scrap bits is called for first I think.

Another one of the “somethings” aka my UFOs which Amity decided needed fixing up was my three Mill Lane Sidings (now N Gauge Society kit 36 – see here for the details on the kit) shock wagons.

From what I remember from when I got them (2010 – seems to be a trend developing here…) Richard Bardsley had done the opens as part of his Mill Lane Sidings range and then sold the moulds to the NGS – I’m sure someone with the full skinny will comment and let me know if I have the wrong end of the horse.  Either way, the kits were very easy to put together and I left off back in October 2010 having painted them with Precision Paints P127 BR Bauxite as recommended.  I thought (and we know where thinking can get you) that I would have to paint the sides white to put the transfers on as I assumed (erroneously as it turns out) that the white part of the transfers were clear.

Fast forward 3 and a bit years and I managed to find the transfers and the wagons (different places – which accounts for the delay in part) and added them to the “something” pile which could be completed at the kitchen table rather than in the shed.

I painted one wagon side white and made a bit of a hash of it to be honest – spray at x paces and no masking so not flash.  Not worried as I knew I was going to have to touch up with bauxite around the edges.  Put first transfer on and that’s when I discovered the white was white and I didn’t need to have done the painting.  C’est la vie.

So two have been done other than the tarpaulin bar – I have to find suitable brass wire – and the white stripes on the ends.  The third needs to have the paint sorted before I get it to this stage. 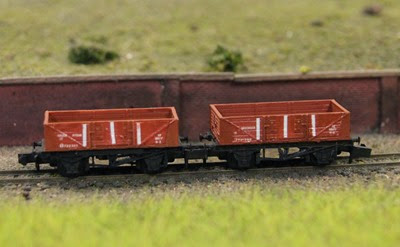 These are similar to the P19 Ballast Wagons which I have likewise in the UFO boxes in as much as the transfers are very thick and the use of MicroSol or similar is highly recommended.  I found it very difficult to get the transfers where I wanted them and so ended up with a less than satisfying pair of models.  I am going to get a Kit 36 from the NGS to see if the transfers are any better and if so, I may see if I can get get transfers and fix them up.  As they are, wreathing will probably hide most of the sins.  I’ll put a picture up when I have managed to sort the three with bars and weathering – hopefully not a similar time span!

Readers with either very long memories or recently arrived and trawling though the back catalogue may remember the title as being attached to a post made back in April of 2010.  For those now curious see here for an explanation.

As it happens, I have been back on the UFOs – the perils of tidying the shed and having your wife ask what's with all the boxes in the bottom drawer…  My UFO drawer as it happens.  So Amity counted and decided there were too many and proclaimed “something must be done about that”.  Permission was sought and granted to do “something” at the kitchen table whilst various paper craft things were being done (we can be together dear) and so “something” has been done.  I’ve finished it.

The windows were done with the Krystal Klear as suggested (correct spelling this time) and from what I could tell from photos, the only lettering was the vehicle number – at least in BR days.  In Southern days they had Luggage and Southern on them as well.  Either that, the rest was hidden under the layer of grime which seemed to be the correct livery from the 1950s as I would have assumed things like length and tonnage would have been somewhere.  I haven’t done the grime yet, but will get around to it in due course, especially as I have the weathering books by Tim Shackleton and want to try out some of his techniques.

I remember how much fun it was to build – and I had only limited experience then.  I will most definitely be getting a couple more – one for painting in Pullman livery once Dapol bring out their WC/BB Pacific.

Time sure does fly.  3 years ago I started the combined 2mm Scale Association, N Gauge Society and British Railway Modellers of Australia Queensland N Gauge Group and I’d like to think it has been very successful in encouraging the various members of the three organisations (some wear two hats – I wear all three!) in their modelling.
For the start of 2015 we did something different – we went on the road for the first meeting.  This was in response to a planned renovation at your humble correspondent’s residence which, had it started when we would have liked, would have meant the place was a construction site as I type.  Alas for the plans of mice and men!  Still, David H was very obliging and offered his residence in lieu and we all had a great time.
David has a US railroad taking shape in a spare room and is one of the mad men who has declaimed that he shall have a working 2mm scale layout by the 2nd Australasian Gathering – which is in August.  With 2 out of 4 points working well he is heading towards success.  The less said of the other declaimer's efforts the better at this stage!  Along with finding out we had an accidental member of the DCC club some work was done by a few of the Group towards their various projects.
This year’s major theme is building dioramas which fit in an archive box.  Anyone who is interested in the rules for same I’ll be happy to email them to you along with the necessary explanations for what a couple of the more localised rules mean.
The road show will continue until July at this stage – hopefully by then we are back to normal.  Certainly hopefully it will be all good by the Gathering dates of 21/22/23 August as it is supposed to be at the aforementioned humble correspondent's abode!
Posted by Sithlord75 at 7:02 PM No comments: