As one of my former Heads of Department was wont of saying when time got away from her, day late, dollar short.  So it is with this report on our Monthly Meeting.
Once again we were on the road for this months get together with the hoard descending on Graeme’s house.  As it happened, we had almost a complete attendance with only Anthony (stuck in Sydney – at least his digs have great views) missing in action.
Ken brought along his wharf again – this time with the controller.  He has fitted his stock with DGs so a healthy discussion ensured about how well they travel (not as well as we thought it turns out!) as there is some debate about moving over to this style from a number of us.  As Graeme uses DGs on his layout, there was plenty of experience to put ideas forward for the enlightenment of those interested. 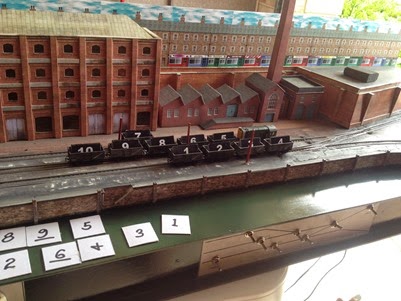 Wharf shunting puzzle.  Get the 16t minerals to be in the same order as the cards.  Takes a lot more thought than you’d think at first glance, as the head shunts aren’t that long!
Ben kept working on his Victorian Railways coaches – up to transfers.  A kit with transfers available.  Can’t be.  The coaches are coming along nicely and he may have to consider a layout for them in due course.
I built a chassis for a Tar Wagon – which I was supposed to have done on Thursday night (spent it doing stuff for uncoupling on Sturminister Newton – hence the discussion of DGs) and I was also supposed to take progress photos for an article and advice page for the lads in the UK.  Managed to take zero photos but have 6 more to do – and Ben offered to let me build his pair if I needed to do more for the photos!  Nice of him. 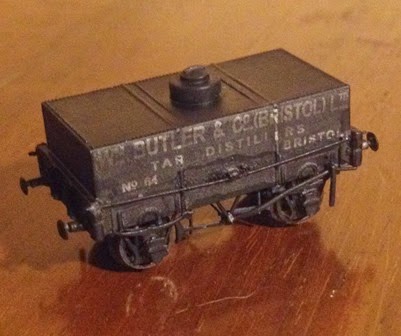 One I did earlier.  The transfer looks straight when viewed side on in real life.  Honest.  This one is getting Rapidos as it isn’t mine!
David speculated about the use of a Dukedog on his embryonic GWR 2mm layout.  This speculation was moved along by the news that he could get one, with 2mm wheels in it, painted etc. from eBay.  Apparently we could have a new toy at our May meeting.  Ben had opted for an N wheeled Midland 0-4-4t.  I am watching with interest.
Graeme had his layout “Thornbury” up and running and has even started on his Archive Box Diorama.  Not only has he picked a spot, he has built boards.  Currently heads the leader board as I think everyone else has only really thought about it, although Ben has started assembling models to place on his.
Photos of “Thornbury” below: 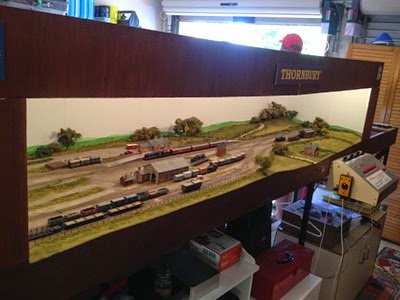 Full length of the layout.  I forgot to ask Graeme how long it is, but the Royal Scot and three in the platform is about as long a train as will fit on the sliding traverser at the far end.  If it is longer than 8 feet I’d be surprised. 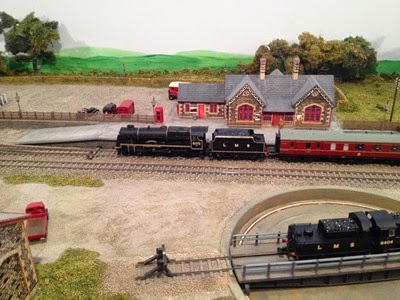 Thornbury has similar buildings to the S&C – same designer apparently.  This means the Metcalf offerings are perfect position holders until the more accurate ones are built. 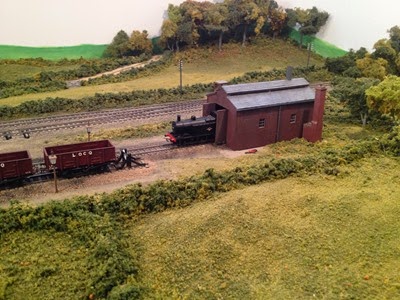 The Engine Shed won Graeme a couple of trophies in modelling competitions in years past.  You can’t see it, but it has the full interior treatment, including all the roof trussing.  I know it’s there, as I have seen it so take my word for it. 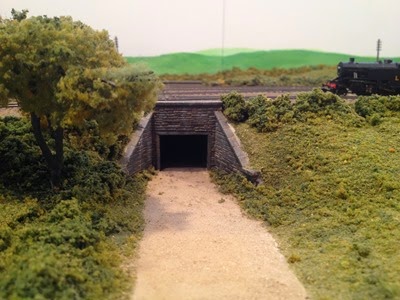 Despite the narrow board Graeme has managed to get the “train in the landscape” feel.  He did comment that he felt it was too sleepy but given the branch was a 7 mile “one engine in steam” (yet we had 4 at the terminus on Saturday!!) affair I reckon sleepy is spot on – and he has got it so, so right. 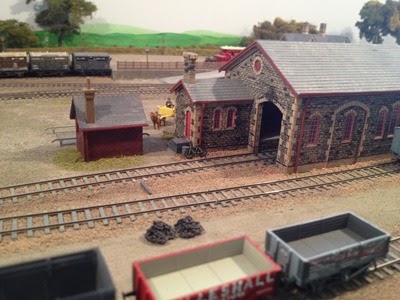 Whilst built to N gauge (i.e. 9mm) all the track is hand made in 60’ lengths using components from the 2mm Scale Association.  The only real give away is the flange ways on the points (which I noticed I didn’t photograph) and the lack of replacement wheels on the stock.
Posted by Sithlord75 at 9:40 PM 5 comments:

At the end of 2013, I was asked if I would be willing to teach a Technical Drawing class in 2014.  Now as someone who did it to Senior, I wasn’t especially fazed and agreed to teach 8 Graphics to help out.  The biggest issue I faced was time had moved on and more of the course was now done with a CAD program than it was back in the late 80s/early 90s of my school days.

Nevertheless, I sallied forth and had AutoDesk Inventor 2013 (which was what we had at the time at work – we’ve since upgraded to 2015 for the students, but not me!) put on my computer.  I attempted some bits and pieces on my own, using a couple of YouTube video tutorials but it wasn’t really until I sat down with Phil Badger of Gopher and Ixion (along with BadgerBits) at the Toowoomba Model Train Exhibition last year that it all started to click.

By June, I had developed enough skills and insights to have a go at drawing a wagon.  I settled on the LNWR D6 2 plank open as my first attempt as it wasn’t too big, I had a decent set of drawings in LNWR Wagons Vol 1 and, importantly, some pictures as well.

After a few nights work, it looked like this: 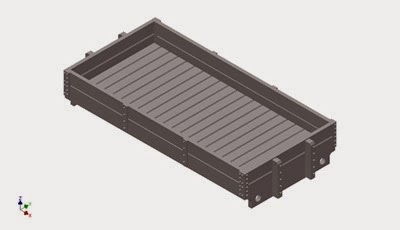 I designed it in a similar way to putting together a plastic kit – one end, one side and a floor then assembled it all – two sides, two ends and a floor.  The assembly was the easiest part as it happens.

I was pretty pleased with it and uploaded it to Shapeways and got a print sent out (along with a bunch of other stuff – so the postage was defrayed).   I wasn’t disappointed with the initial print, but I was not surprised that there were a couple of areas which needed tweaking – principally the buffer hole spacing.  Since then I have received two more prints (which have gone slightly banana shaped since arriving but flex back under pressure.  I presume once I build the chassis and fit, this won’t be a problem.  Not sure if it is climatic or something else) and had a few people buy the model.

I know that the cost of the model is far greater than the price of the materials for scratch building or even the time involved (by the time you allow for the time drawing).  However, the time drawing was useful as it was learning and any new skill takes time.  Further, if I want more than 3 of them, I can get more which will be identical – something I doubt my scratch building skills will allow for at this time! 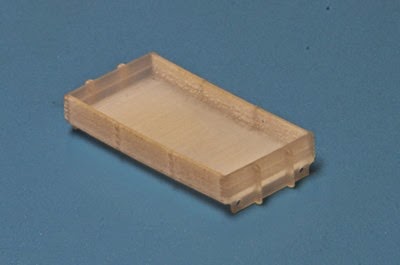 The picture shows the post Beta print.  I hope to have it on a chassis and painted (Humbrol 79 apparently is a reasonable match for LNWR grey – prior to weathering!).  Transfers – well, typically this is yet another kit where there isn’t any!  However, I am learning how to fix that problem as well.

I have started on another LNWR wagon – the D15 Beer Van.  As it happens, I can tweak that drawing to become the Grain conversion without too much hassle.  Those of you with LNWR Wagons Vol 2 can check it out.  The ends were the work of an hour – which I doubt I could scratch build in that time to be honest.

I am considering putting it up as a 3 or 5 body option which should bring the price down – if you are interested in getting more than 1, please get in touch and I’ll see what I can do.