I have had a go at painting the Prize Cattle Van and the Fruit Van but I am not too pleased with the results.  The biggest hassles are getting good coverage of the white - on the Fruit van there has been a bit too much of a build up around the vents for example - and the painting around the louvers on both.  Part of the problem is I am limited to a brush so the coats are thin and take time but probably aren't thin enough.  I think I will strip both when I get back to Brisbane at the end of the year and redo with an air brush - at least that way I can prime in grey, paint white then mask and paint LNER Teak.  I am working on the basis that they are 1920s version and by this stage, rather than varnish (as was done in early GER days) the works painted.
The second of the Fruits is at the stage of needing buffers and the underfloor stuff done (the pair above need some detailing bits done under the floor too but as these will be in plastic and then painted black, it isn't critical at the moment!) but I will have to organise with Shop 2 some buffers before anything else happens there.
Posted by Sithlord75 at 12:39 PM 3 comments:

Email ThisBlogThis!Share to TwitterShare to FacebookShare to Pinterest
Labels: 2mm, Wisbech and Upwell

Having gotten inspired following the progress on my GER Cattle Wagon from the 2mmSA and the drawing closer of train 2 for the proposed Elm Road layout (base board building is slated for January BTW) I decided to hook in and get started on train 3.  Those familiar with W&U books will be also familiar with "The Sweeper Train" as Amity and I have dubbed it.  Basically it is a picture of a mixed train of two GER Sundry Vans, a GER Prize Cattle Van, something which looks like a GWR Python (but probably isn't!) Brake 16, a bogie tramcar and a 4 wheel tramcar, all hauled by G15 (Y6) No. 0125.
Long suffering readers will remember back in March or so last year (2010 - helps to put this in for readers in 2012...) we got some etches (some?  Heaps!) from David Eveleigh to put together the stock of the W&U.  These etches included most of this train.  The 4th vehicle is the only one missing (the one which looks like the GWR Python to this untrained eye).  So I have been doing stuff towards this. 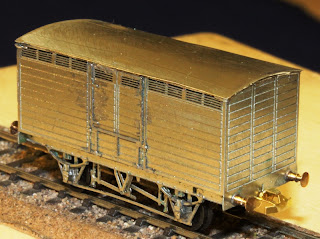 First up is the GER Prized Cattle Wagon.  As it happens one is still in existence and is in store at the North Norfolk Railway.  A picture of one way back when is here.  Pity it is in B&W because I have spent some time this afternoon trying to work out if these wagons were painted a la Passenger Stock (ie Teak) or having being converted to fruit conveyance (hence its appearance in The Sweeper Train in 1921) to GER Slate Grey (and therefore the colour the GER Cattle Wagon in the previous post).  I am pretty sure they didn't make it into Crimson, which is what coaching stock was painted in from 1919.
David's etch for this is merely the body.  Chassis and Roof along with other bits and pieces as required the problem of the builder.  This one is running on the same chassis as the Cattle Wagon but with both sides braked.  The roof is a spare one I had around, still have to remove the last vestiges of the rain strips as the roof was for something longer!﻿ 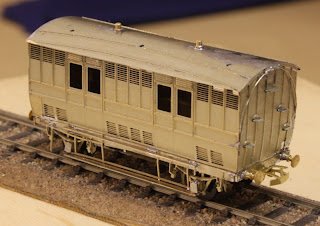 Second up we have one of the two Sundry Vans which appear at the front of the train in question. This time all the required bits other than wheels, bearings, coupling and the hand rail seen over the steps are included. Again, my research hasn't convinced me of the livery for this wagon, but it was still classified NPCCS in 1921 so I suspect it was teak.  The photo which I am working off, does have the tramcars in a much darker shade of grey - and the bogie one has a white roof suggesting recent shopping and thus painting.  This would make the tramcars in the Lake livery which No 7 is currently in at the NNR and the rest of the train in...
Amity suggested I should paint the two wagons in what I think is the correct livery, post the pictures and sit back and await developments.
The Prize Cattle wagon was at a running stage prior to the weekend, merely requiring the roof to be added along with the DG.  The Sundry Van was started yesterday evening so is the work, on and off, of just on 24 hours.  I am aiming to have the second one completed prior to going back to work on Monday.﻿
Posted by Sithlord75 at 9:00 PM No comments:

Email ThisBlogThis!Share to TwitterShare to FacebookShare to Pinterest
Labels: 2mm, Wisbech and Upwell 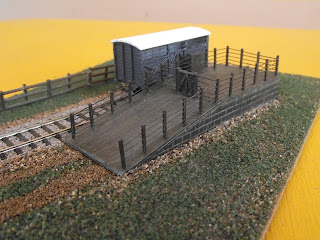 I found some buffers when I was tidying up my workbench so I have pressed on (despite fighting whatever dreaded lurgy there is travelling around Longreach at present) and fitted these and painted the wagon.  Still have to do transfers and then weather.
Last post I said I would try and take some pics of the interior.  Members of the VAG will have seen the results of these - they served their purpose but weren't especially good shots of the model.  This photo shows the interior in what I think is more likely circumstances - still shows up, but not worth the hassle I think to do much with.
Hopefully I will have a productive weekend - as this wagon is for the W&U collection and progress is being made on the DG couplings on the Fruit Vans, I am hopeful of starting on train 3 over the weekend.
Posted by Sithlord75 at 9:22 PM No comments: 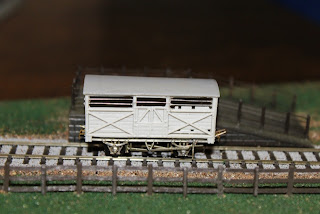 Above is my build of the 2mm SA GER Cattle wagon kit running on the recommended chassis.  I don't have any buffers (NYA or TOS seems to be the issue there) so it isn't ready for painting yet.  I have managed to work out a system for DG couplings and these are fitted and work on the test bench so very please with self for that.
The original build didn't use the wire you can see in the photo but rather the pink monofilament stuff you get (got?) in Ratio signal kits for forming the handrails.  Following discussion on the 2mm VAG I changed this for 0.25mm wire which I fitted by drilling holes in the ends and threading through, fixing in place with super glue.  There has been some discussion on the view of the inside - I tried without any success to take a picture of the inside but will have another attempt with daylight rather than flash tomorrow (it being just after 2100 here as I type).  I do know one thing - when you hold the finished product up to the light, you can almost see though the side planking so I think it is a bit too thin to do much with - there is the option of gluing styrene strips on the inside to look like planking if it is something which matters to the individual.
The side of the chassis in shot has the brake shoes - the other side is shoeless and leverless as this is what the photos provided to me by members of the VAG show.  I wasn't particularly surprised at there being only 2 of the 4 wheels braked but I was surprised that the lever is only on the brake side, not on both.  Someone will doubtless tell me if I got it wrong - the pictures are old after all...﻿
Posted by Sithlord75 at 9:08 PM No comments:

I joined the N Gauge Forum over the weekend (it is here if you haven't found it) and found my way to a diorama challenge (here).  Now my local model railway club has as one of its sections in its Annual Model Making Competition a Diorama section which is limited in size (which tends to cause issues for 7mm modellers who can't get anything in and for some 2mm modellers who think they should fill the space, although I have it on good authority it is a maximum size limit, not a minimum one) and which for a variety of reasons isn't frequently contested.  I had a go a couple of years ago and along with the other entry was fouled out by the 7mm modeller judge (both entries being N and he didn't like them apparently!).  Since I am banned from 3 sections this year (on account of winning them last year - see here for details - I thought I might as well kill two birds with one stone and use the same entry for both.
I came home from work early today owing to a massive headache - not sure if it is what my daughter has been home from school for 2 days with or something else - but after a siesta and some drugs (caffeine mostly!) I found myself a 4x6 photo frame and nicked the bit of hardboard which was in it (something to replace later no doubt!) and made a start.  The photos were all taken today and show progress. 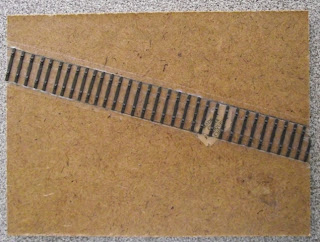 Because I don't like straight lines, I put my track across the board on the angle.  The sleepers are actually 2mm ones which I got from the bloke who I call "The Dealer" as he was the one who sent me my first 2mm "hit" 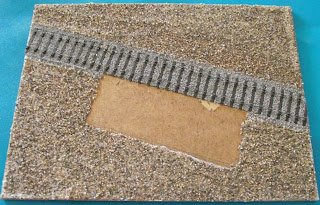 My preferred method of putting down these types of sleepers is to use Amity's wide double sided tape.  This then means, with some thin DS tape next to the sleepers ballasting is simple.  The surrounding dirt is washed out sand from a road graded down to get it as fine as possible on neat PVA glue. 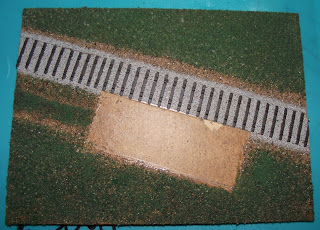 Leaving space for the chosen building (my scratch built cattle dock - see here and here for the more interesting parts of the story) the green was added after some Woodland Scenic brown.  I left the ruts from the cattle lorries backing up to the dock visible - not sure if this would be true in the UK but certainly would be here - assuming the grass was that green! 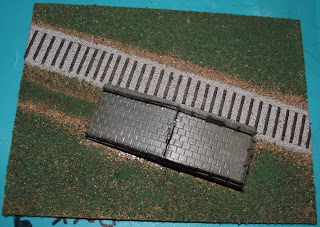 Cattle dock in place - it isn't fully glued down, just a little bit so it doesn't fall off.  It is, after all, destined for Swallow's End (which will progress, dear reader, when I sus the TOUs!) 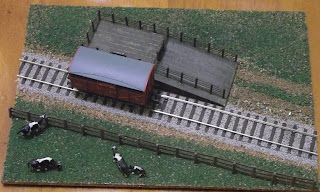 Rails added, along with the fence and some future customers of the facilities watching over the fence.  Still to do some weathering of the track - I don't think it would have stayed that clean for long after building and I don't know it would have been replaced to such a neat standard either!  There is still some things to do on the dock itself - tap, water trough etc and I am considering a light.  Either way, quite pleased with the afternoons effort.
Posted by Sithlord75 at 9:04 PM No comments: