This is probably the last post from Longreach as we are leaving on Saturday for home - and the train shed!  4 years in the bush minus my main layout has been at times quite depressing particularly as I would (like I did today) get some nice models and not have anywhere nice to run them (the RR and SYWP 101s arrived today).  I won't have my layout probably until the New Year but it will be much closer (at 30 mins instead of 12 hours drive!) than it has been in a while, and with my full set of tools and my shed, I can make a proper start on some of the plans I have, together with faster progress on some of the things which I have started whilst out here.
The last bit of modelling was done today - I got some black on the K class.  Tonight I have spent some time sorting out and packing away my work bench.
Photo of the K below - looks pretty good.  Once I get the steps on, I will do some detail painting before looking at the transfers - then there is the tender bogies and I will be done.

Progress has been made on K190 with some of the brass detailing bits having been done.  As you can see in the head on shot, the body isn't on square (and the handrail above the smoke box door needs fixing) but it does sit square - just not fitted correctly for the photo.  I still need to do a bit of cleaning up around the cab windows and add in things like the steps and so forth before painting in black.  I tried to organise it so the light would work on this one too (see the 3801 updates below) but almost drilled a hole in the middle of the smoke box so decided to abandon the project where it is.  I will paint the inside of the light silver prior to glazing.
The tender has had no work done as yet - I have to sort out the lack of bogies for it so inspiration has been hard to come by. 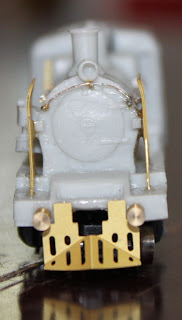 Along with the Badger Bits C38 kit mentioned previously (now waiting for me to get to Brisbane and Horizon Hobbies to purchase the paint recommended by the Australian N Scale e-Group) I purchased the VR K Class kit as I had been on a trip from Lilydale to Yarra Glen with K 190 around the same time as 3801.
Like the 38, it is a resin casting to fit on a Micro Ace chassis.  Unlike the 38, no mods are necessary to the chassis and the loco body was easy to clean up.  Progress pic below, followed by one of the real thing I found on the Internet (Michael Greenhill's photo from Flicker.)  I plan on making mine look like this, minus the sticker under the cab window so it is an ideal shot for inspiration for the model.  I have thoughts on the motor in the cab but haven't explored options for making it smaller yet.  Next step with the body is to drill out the chimney and then put on the brass etch detailing bits. 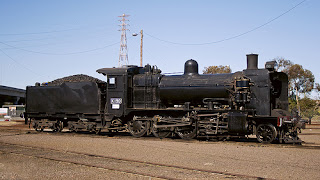 I have almost got to the point with my 38 that all which will be left will be spraying it green, the detail painting the cab roof, cylinders, front end and light before putting the transfers on and the glazing in before coaling the tender.  This means I have managed to fit the front buffers and steps, fit the cab steps, put on the rear buffers and fit the tender ladder and put on the hand rails - I have, at the time of writing, only put on the RH side one.  LH side hopefully later today.  I have also managed to fit the body to the chassis square - my initial efforts had it a little RH down but a bit of clearing of the inside of the has solved this. 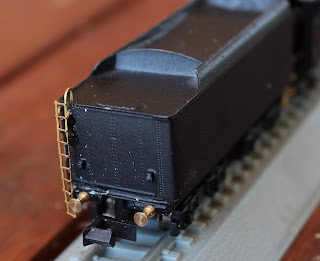 The twist in the ladder has been fix - I guess that is one of the uses of close up digital photography! 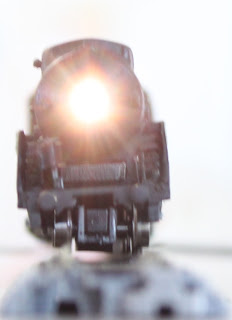 You can see the slant in this pic taken with the motor removed but the light on.  Quite pleased with the effect although I will be dimming the light once I DCC the loco.
Posted by Sithlord75 at 10:11 AM No comments:

Having put in about an hour of work on the cleaning up of the cast for the body (which needed a bit, but only on the underside of the footplate and around the front steps - the boiler was very clean with no need to file or fill).
The Micro Ace chassis which is supplied for this has a light in it so I have painted the whole black (including the tender so there should be no problems when I come to paint it all green - at least the green will have the same undercoat) to stop the light shining where I don't want it.  I due course (tonight possibly) I will drill out the front light and after painting fill it with some Micro Glaze or something similar.
Don't worry if you are looking at it and thinking the body is high at the cab end - it is.  It does go on straight but this was a quick photo session to show progress to a couple of people and to update the blog.
My parents sent me the photo below - I am the one of the left looking at the photo with my brother.  This was 3801's first trip on the Main South to Moss Vale following its return to steam in 1986.  We had travelled up from Melbourne on the Inter Capital Daylight (instead of chasing it in a car as we normally did) and then following the return from Moss Vale caught the Melbourne Express (the replacement to the celebrated and much missed "Southern Aurora" sleeping car express) overnight back to Melbourne.  I am planning on making my model look like this - possibly without the two little boys in the foreground however! 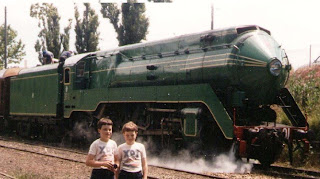 A few years back I met Phil Badger of Badger Bits and Ixion fame - prior to the initial Manor release actually - at the AMRA Exhibition in Brisbane.  Phil had emailed me prior to the show to say he was coming to Brisbane for it and would love the opportunity to catch up.  His intended 30 mins ended up being 3 days and at least one evening into the small hours as he learnt a lot about British steam locos from myself and Ben of Oz (check out Ben's stuff on RM Web by searching for nebnoswal - he is doing a great job of building Sturminister Newton on the SDJR in his shed in Victoria).
Phil brought with him this:

Now for those who don't know a lot about Australian Steam the NSW Government Railway C38 hold pride of place - mostly because the class leader, 3801, travelled across the continent in 1970 and again in 1988 prior to Flying Scotsman doing the same in 1989.  (Had the Victorian Railways not scrapped their S Class 4-6-2 Streamliners, then the C38 may not have had top spot.)  Suffice to say, 3801 is the Australian equivalent of 4472.  The model photographed on my "St Alban's Priory" layout is of 3802, the next in the class.  5 were finished like this, and 25 without the bullet nose and cowling on the top of the boiler.  Similar to the LMS Duchesses the streamlining didn't make much difference to the capabilities of the class.
I have been eyeing off getting one of my own pretty much ever since and in today's post I got both the Badger Bits kit for the C38 - with 3801 transfers - and a kit for a Victorian Railways K class 2-8-0.
So far work has progressed on cleaning up some of the flash on the body - resin cast and it goes on a Micro Ace chassis.  Can't really tell you much about it as Phil forgot to put the instructions in and I haven't yet emailed to ask for them!
Photo to date:
﻿

All things considered it is a pretty clean casting.  Further progress photos and postings in due course.