One of the LAG members dabbles a bit in USA outline.  My original trainset, given to me at birth, is also American and I have, from time to time, dabbled a bit myself.  The collection isn’t particularly big and, owing to not knowing very much about the US at the time, the Roads which I had locos and stock for were more purchased on the basis of either it was cheap or I liked the look of it.  When I finally sat down a couple of years ago to consider what to do with it all, I found I had bits and pieces from 5 roads, three of which were orphans – or very tenuously connected to the others.

It was about this time that David mentioned he was going to do is own shortline and was essentially running his railroad as a hook and pull operation from the nearest Class 1 down a branch.  I had a bit of a read around the internet and found this was a pretty common method of playing trains in the US and figured it would enable me to justify most of what I had – all I had to do was assume the Class 3 Road I was operating had purchased the random locos from the Class 1 which had purchased them from the manufacturer.  This would enable a PRR K4 Pacific for instance to be running over next to a GN F7.

A bit more thinking and I decided to upgrade to a Class 2 Road as this enabled me to have more miles and more money, justifying repainting the eclectic collection and so the Empire Railroad was born.

All this back story is necessary I suppose to explain how I came to getting some decal paper and making my own transfers.  I needed to do something to make my own railroad livery!

I got my paper from eBay and an Australian supplier.  Heaps out there and much of a muchness for price.  I got a single clear A4 sheet to practice with.  As I can’t print white, any white lettering needs to go on a white paint swatch.  Similarly, I have found that unless I print in black, and at photo quality, I have to put colours onto a white background as they appear washed out.  It is still a trial and error process.

I have however had a couple of successes.  The Empire Railroad has three 2-8-0 steamers (Bachmann ex-Missouri Pacific) and these have had Empire put on the tender and 1977, 1980 and 1983 applied to the cab sides for the road numbers.  Because I did these myself, I wasn’t limited to what Fox or anyone else did for fonts and so they were done in BANK GOTHIC Lt with a bit of manipulation on spacing and so forth.  These were printed by firstly printing the desired shape and size on plain paper then cutting enough transfer paper from the sheet to cover, sticking it over with scotch tape and reprinting.  I painted a white square on the tender and slide the transfer on.  Once dry I painted around the transfer with matte black.  The same approach went on the cab side but this was a bit more lumpy with detail – US locos aren’t as neat and tidy as UK – and so I had to use microsol to get the transfer to lie flat.  One of the six number squares mucked up – must get around to sorting that.

I also did three Microtrains cabooses – two started life as BN Green (so post 1970 which was much later than I decided on – I’ve decided 1950s for steam to still be hanging on in parts but broadly diesels hold sway) and one in PRR brown.  They were painted rattle can red from Bunnings – and then suitably adorned with the Empire logo and number 501, 502 and 503.  As these were black it was very simple.

Finally, I mentioned last week I’d have a photo of the Simple Green for those who want to find it and give it a go – as I mentioned I got mine from Bunnings in Australia so I don’t know if it is available overseas but if I had a dollar for every time I’d been told to use Johnson’s Klear….  Turns out Simple Green is made in NZ so chances are they export it further than the West Island eh bro? 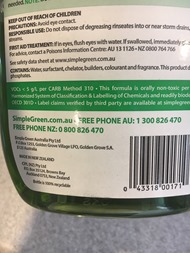 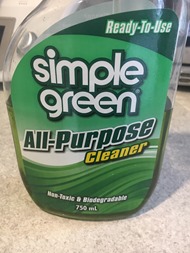