As I have mentioned in previous posts, I recieved a number of these etches as part of the organised run in March.  The D33 was, until the building of the D88 (at least as I understand it) the most numerous of the LNWR’s goods vans and some lasted well into the 1920s and even the 1930s from an original construction date of 1893-1904.  Since I have hopes of a layout spanning the period 1918-1958 (well the means to ring the changing scene at least) some of these were a must and so 6 came down to me. 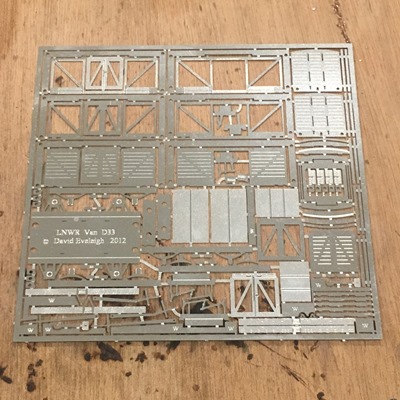 This is what you get out of the packet.  Now I didn’t get any instructions – or if I did, they came via email and I didn’t notice.  Certainly there was nothing in the packet but having built more than a few vans, and being armed with LNWR Wagons Volume 2, I set to building the first.

I started with the sides.  The picture below shows the various bits for the side with the large door (which has the roof door above it) with the etches for the small offside door contained there in.  Threw me for a bit as I thought it was the door to fit the space and it didn’t.  Quick check of the bits left on the etch sorted it out and progress continued.  I don’t use the locating bits as I find it difficult to release the bits I want from the waste so I cut everything out, clean up unwanted tabs and then carefully solder it all together, usually without incident but sometimes I need to unsolder and reposition – this can often result in burnt fingers as the job heats up with the to and fro. 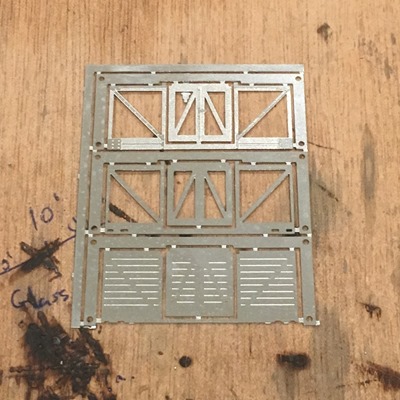 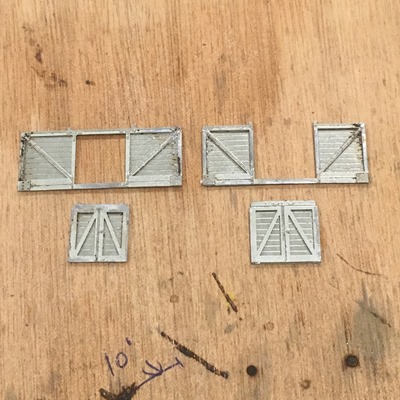 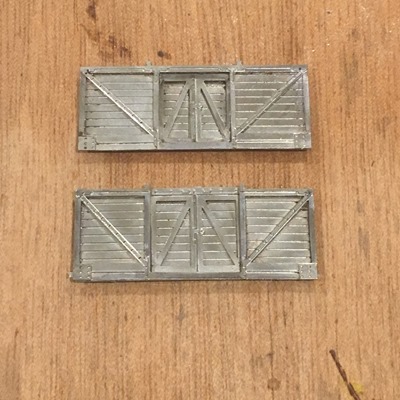 Sides all done.  Next was to either fit the ends or look at the roof door bits.  I actually fitted the ends on the wagon but cleverly didn’t take a picture of this step (and I have now mostly built a second and still didn’t take photos!).  Straight forward allowing for the fact that the back two layers of the sides sit behind the ends and the front sits on the side. 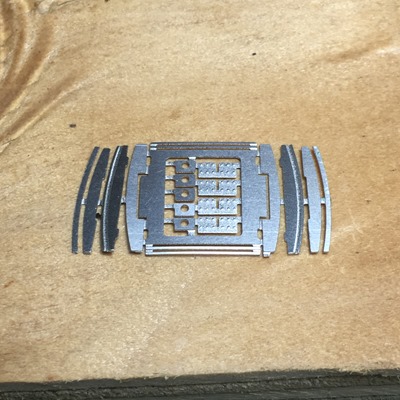 The roof door goes together in a rather neat and ingenious way.  Rather than trying to solder bits and pieces together as part of the roof as such, this frame is made up for the roof door and drops into locating holes on the inside of the sides.  The bits in the middle are for detailing and packing out for the chassis so they need to be removed before starting.  Likewise, I am not sure what the thin bits etched on the sides over the doors are for so I removed them.  Goes together ok so I assume they aren’t strictly needed and I couldn’t find any reason for them on the plans either.  If I am wrong, I am sure a Reader will Write. 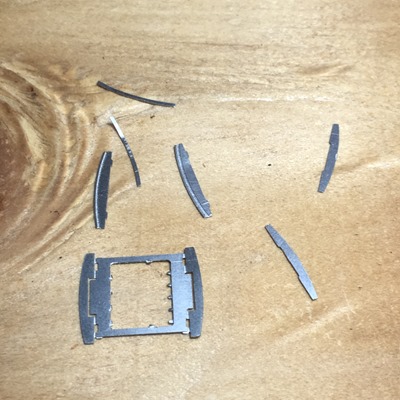 All the bits cleaned up and ready to go.  I have found from experience the two thin bits are useful to make sure the non-door part of the roof fits in neatly. 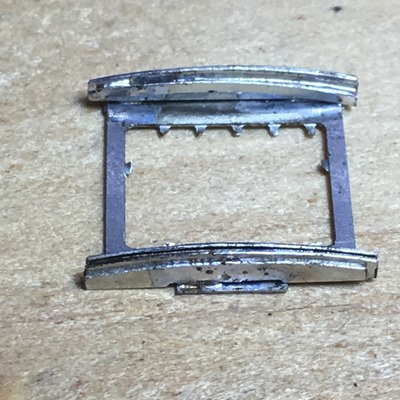 All put together.  The thick piece with the half etch one it fits on the inside.  The half etch bit faces out – ie into the space – and helps to line the roof door up.  The medium bit goes on the outside and supports the roof pieces which cover the end sections of the van and then the two thin bits go on the inside as packing. 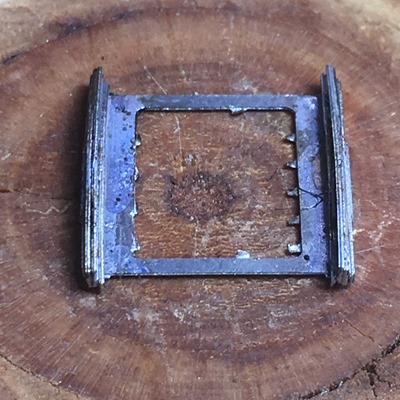 All done – I should have photographed this with something for scale purposes but the part measures 14mm x 15mm in real life. 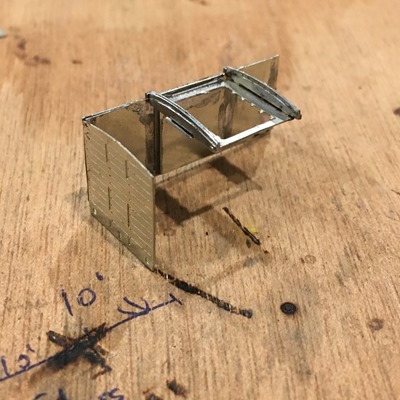 It goes in here – I did this on the first one and made the box up on the second.  There are spacers which are supposed to go at the bottom, probably with captive nuts on them, to screw the chassis on to, but I didn’t fit them as I found I hadn’t quite lined everything up as well as I thought on the first one, and having done a better job on the second, they fell out at one point when I was soldering something else so I left them. 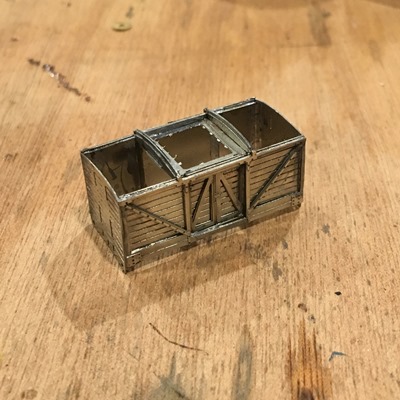 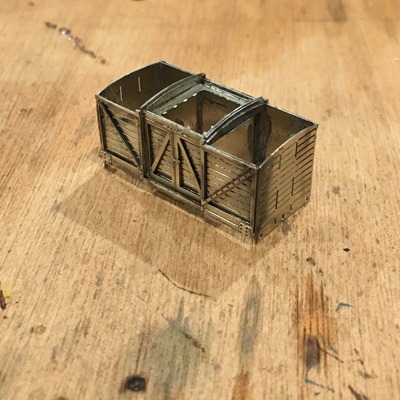 So all ready for the roof pieces to be fitted. 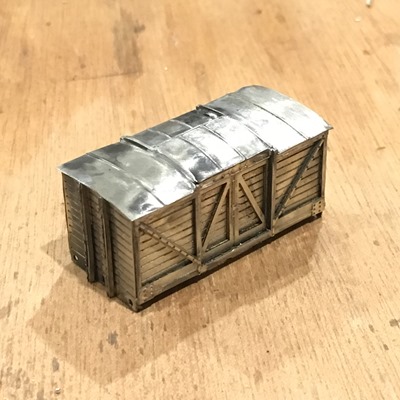 The end pieces didn’t go on as neatly as I think they were designed to.  I had to fettle them a bit – not sure if it is the build (likely) or the tolerances were ok on the CAD but didn’t translate on the final etch the way it was imagined (possible). 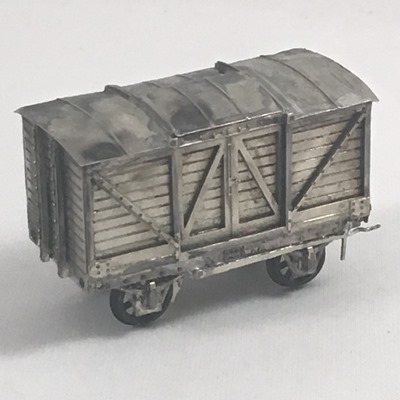 The chassis went together with no hiccups.  I packed it out with some spare etched buffer beams from other builds and filed them back, then drilled out for the buffers.  I have, since taking this, found the missing buffers and these have been fitted.  I chose to fit the single sided one shoe brake with a view to decaling this one as per the picture on page 12 of LNWR Wagons Vol 2.  With 6, I figure I can do most of the pictures including the LMS one a couple of pages later.