The bloke who I am making all these cattle vans for also managed to obtain this little gem of a kit – I was too slow when County Rolling Stock had them.  Steve Da Costa, the designer, now has a Shapeways shop (here) with Ben having obtained his Patriot kit (and very nice it is too.  However, too many UFOs here in the queue to get one…yet) from him via this means recently.

Anyway, I have had this kit of Ben’s sitting around for nigh on 12 months and I thought it was about time I got it sorted – and it was a nice break from cattle (more of which later). 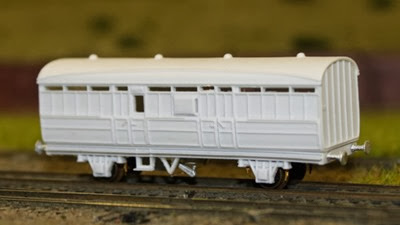 This first picture shows pretty much what you get.  Wheels, chassis and body with some brass and white metal detailing for the underframe.  The original, as I understand it, was Rapid 3D prototyped then cleaned up to create a master, from which a mould was made and then a production run cast.  Hopefully Steve adds it to his Shapeways shop as I would mind having a couple and another of our LAG lads would like some too.

As there is only two parts to the main bit of the kit and minimal flash, this didn’t take long.  Drill out for the whitemetal buffers, glue in tophat bearings for the wheels, glue on the vacuum brake cylinder and the brake shoes – which you can just see if you look hard enough – and you are ready to paint.  The photo above took roughly half an hour to get to from opening the box.

A quick glance at Historic Carriage Drawings Vol 3 by Tatlow gave numbers, liveries and some useful drawings which showed two pipes for steam and brake were fitted.  Ben models the SDJR at Sturminister Newton (see here on RMweb and then follow links from there to get a better idea) tentatively in the 1950s (well there is a green 9F which often makes an appearance hauling a long rake of coaches – having said that, the other day a Class 60 was running!) so the model was finished as E70199 in BR crimson.  I found some pipes in the bits box to put on each end.  Once glazed and what not, a light dust of Tamiya powders gave it the necessary cross country look. 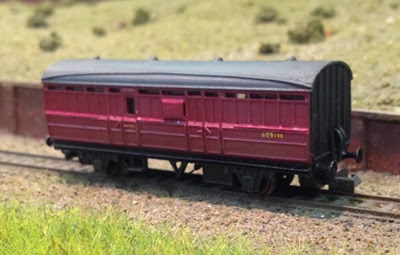